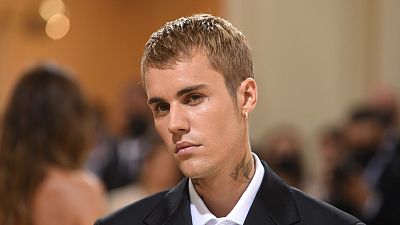 A rare disorder called Ramsay Hunt syndrome has made headlines after pop singer Justin Bieber announced he had the condition and was forced to cancel his upcoming shows.

Ramsay Hunt syndrome is caused by the same virus that causes chickenpox and shingles, and can lead to facial paralysis.

The 28-year-old Canadian superstar said in an Instagram video on Friday that the condition had left him unable to move part of his face. He demonstrated how he was unable to blink one of his eyes and could not smile on one side of his face.

"Obviously as you can probably see from my face, I have this syndrome called Ramsay Hunt syndrome, and it is from this virus that attacks the nerve in my ear and my facial nerves and has caused my face to have paralysis," he said.

Following the revelation, some social media users tried to link the condition with the side effects of COVID-19 vaccines.

Here is what we know about Ramsay Hunt syndrome, what causes it, what its symptoms are, and how it can be treated.

Ramsay Hunt syndrome is caused by the same virus (varicella-zoster) that causes chickenpox and shingles.

After chickenpox clears up, the virus still lives in a person’s nerves, according to the Mayo Clinic. It can reactivate in later years to cause shingles, which is a painful rash with fluid-filled blisters.

Ramsay Hunt syndrome is a shingles outbreak that affects the facial nerve near the ear, says the clinic. This can cause one-sided facial paralysis and hearing loss.

What are the symptoms?

There are two main signs of Ramsay Hunt syndrome, according to the Mayo Clinic:

The rash and facial paralysis usually occur at the same time, although sometimes one can happen before the other, and at other times the rash never occurs.

If you have Ramsay Hunt syndrome you might also experience:

How do you treat Ramsay Hunt syndrome?

Patients with Ramsay Hunt syndrome are treated with antiviral drugs as well as corticosteroids, anti-anxiety medication to relieve vertigo, and pain relievers.

Patients often fully recover within a few weeks if there is not much damage to the nerve.

Charles Nduka, a consultant plastic reconstructive surgeon in Britain and the co-founder of health charity Facial Palsy UK, told Reuters that about 75 per cent of patients with the syndrome who receive early treatment, including steroids and antivirals, make a full recovery.

Nduka said he could see “encouraging” early signs of recovery in the video Bieber shared.

“Before the smile recovers, the first thing that will develop is there is increasingly symmetry in the face at rest. So, the base of the nose often elevates slightly, and the mouth becomes more even. On the video that was shared I could see some signs that there is some early recovery”.

Is Ramsay Hunt syndrome the same as Bell's palsy?

Ramsay Hunt syndrome is often confused with Bell’s palsy, but the two conditions are not the same.

Bell’s palsy is described by the UK’s National Health Service (NHS) as a temporary weakness or lack of movement affecting one side of the face. Unlike a stroke, the facial weakness develops gradually, and most people get better within nine months.

The main difference between the two is that we know that a specific virus causes Ramsay Hunt syndrome. With Bell’s palsy, the cause of the paralysis is not known.

“Someone with Ramsay Hunt syndrome would normally experience severe pain in the ear, face, head or mouth,” Facial Palsy UK said. “You can have pain with Bell’s palsy as well, but not as severe as with Ramsay Hunt.”

While facial paralysis is found in both Bell’s palsy and Ramsay Hunt syndrome, someone with Ramsay Hunt syndrome may experience additional symptoms such as vertigo or dizziness, tinnitus and sometimes a red rash in the ear, mouth, throat or hairline, said the organisation.

How rare is Ramsay Hunt syndrome?

Ramsay Hunt syndrome can be developed by anyone who has had chickenpox, but most cases affect older adults, and cases are rarely seen in children.

“​​The disorder is the second most common cause of atraumatic peripheral facial paralysis after Bell’s palsy,” Facial Palsy UK told Euronews Next in an emailed response.

“Some researchers believe cases of Ramsay Hunt syndrome go undiagnosed or misdiagnosed, making it difficult to determine the disorder’s true frequency in the general population.”

No link to COVID vaccination

Following Bieber’s announcement, several social media users have linked his syndrome to the COVID-19 vaccine, claiming that he had developed the disorder because of it.

Others have also claimed the vaccine causes Bell’s palsy.

However, there is no evidence of such a link.

"Currently there is no strong evidence that the numbers of reported cases of Bell’s palsy or Ramsay Hunt syndrome are higher than would be expected in the general population," said Facial Palsy UK.

"One of the difficulties is that side effects are identified based on reporting, so some things that are reported could be associations rather than causative," it said.

"The most difficult thing for members of the public to understand is the difference between association and causation".