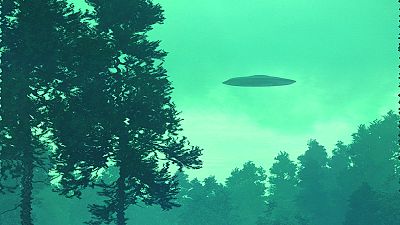 NASA is getting serious about UFOs - or at least exploring the topic with an open mind.

The US space agency has announced it’s launching an independent study into what it calls unidentified aerial phenomena, or UAPs.

The study, which will begin this autumn and cost no more than $100,000 (€94,000), aims to identify how much information is already out there and how much more is needed to understand the unexplained sightings in the sky.

“NASA believes that the tools of scientific discovery are powerful and apply here also,” NASA’s science mission chief, Thomas Zurbuchen, said in a statement on Thursday.

“We have the tools and team who can help us improve our understanding of the unknown. That’s the very definition of what science is. That’s what we do”.

The agency argued that “unidentified phenomena in the atmosphere are of interest for both national security and air safety” and aligns with another of its goals: to ensure the safety of aircraft.

“There is no evidence UAPs are extra-terrestrial in origin,” it added.

Zurbuchen acknowledged the traditional scientific community may see NASA as “kind of selling out” by venturing into the controversial topic, but he argued the agency could play a key role in finally cracking some of the sky’s mysteries.

“We are not shying away from reputational risk,” Zurbuchen said during a National Academy of Sciences webcast.

“Our strong belief is that the biggest challenge of these phenomena is that it's a data-poor field”.

The study, which is expected to last nine months, will be entirely open, with no classified military data used.

The independent team will be led by astrophysicist David Spergel, president of the Simons Foundation for advancing scientific research.

I can tell you we don't know what makes up 95 per cent of the universe. So there are things we don't understand

Daniel Evans, the assistant deputy associate administrator for research at NASA’s Science Mission Directorate, will serve as the NASA official responsible for orchestrating the study.

“Given the paucity of observations, our first task is simply to gather the most robust set of data that we can,” Spergel said.

“We will be identifying what data - from civilians, government, non-profits, companies - exists, what else we should try to collect, and how to best analyse it”.

“A sense of humility”

NASA already has an astrobiology programme focusing on the origins, evolution, and distribution of life beyond Earth, with teams studying water on Mars and probing promising “oceans worlds” such as Titan and Europa.

The agency’s search for life beyond Earth also includes using missions, such as the Transiting Exoplanet Survey Satellite and Hubble Space Telescope, to search for habitable exoplanets.

The new independent study will seek input from experts in the scientific, aeronautics, and data analytics communities to focus on how best to collect new data and improve observations of UAPs.

Spergel said the only preconceived notion going into this research effort is that the UAPs will likely have multiple explanations.

“We have to approach all these questions with a sense of humility," Spergel said.

“I spent most of my career as a cosmologist. I can tell you we don't know what makes up 95 per cent of the universe. So there are things we don't understand".