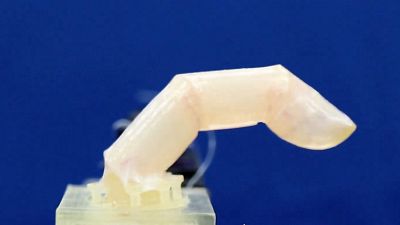 Scientists may have moved us one step closer to creating truly life-like robots, after successfully covering a robotic finger with living skin that can heal when damaged.

In a process that sounds like something out of a sci-fi movie, the robotic parts are submerged in a vat of jelly, and come out with living skin tissue covering them.

The skin allows for the finger to move and bend like a human finger, and cuts can even be healed by applying a sheet of gel.

It also provides a realism that current silicone skin made for robots cannot achieve, such as subtle textures like wrinkles, and skin-specific functions like moisture retention.

The scientists behind the work say it is “the first step of the proof of concept that something could be covered by skin”, although it may still be some time before an entire humanoid is successfully covered.

Previous attempts at covering robots with living skin sheets have only had limited success due to the difficulty of fitting them to dynamic objects with uneven surfaces.

The team at the University of Tokyo in Japan may have solved this problem, using a novel method to cover the robotic finger with skin.

The finger is submerged in a cylinder filled with the jelly - a solution of collagen and human dermal fibroblasts, the two main components that make up the skin’s connective tissues.

This provides the first layer of skin, which is then covered in human epidermal keratinocytes cells. These cells make up 90 per cent of the outermost layer of skin, giving a realistic texture and even water-repellent properties.

“If you think about skin, it’s like a suit, something that you wear,” one of the scientists, Minghao Nie, told Euronews Next.

“When people think about making something to wear, they tailor and stitch it so it fits your body. For our method, we use a different approach”.

The jelly they use is populated with cells, which contract the jelly, so “if you contract the jelly surrounding in our case a robot finger, it will automatically fit to the surface of the robotic finger,” Nie explained.

“So in that way we can make a very seamless covering of the robot finger with the skin tissue.”

The crafted skin is strong and elastic enough to remain intact when the finger is curled and moved.

If you think about skin, it’s like a suit, something that you wear.

To cover an entire robot humanoid with the skin with this method, the scientists would therefore submerge the entire body into a vat of the jelly.

The seamlessness of the method does, however, present some problems, such as what to do if the robot needs to be plugged in to charge, or to have some of its inner parts fixed.

“If you had an autonomous robot with its own battery, then you could easily cover it wholly without any opening. Maybe someday [if] you want to charge it, you could do it wirelessly,” Nie said.

Mimicking the appearance of humans

One of the key reasons for covering robots with human-like skin is to increase trust and likeability.

The authors of the paper, published on June 9 in the journal Cell Press, write that it is “imperative” to mimic the appearance of humans with “humanoid covering materials with realistic tone and texture of human skin” to improve their communication with humans in a variety of settings such as healthcare and the service industry.

“For our next step we would like to cover a robotic face,” Nie said.

“The human perceives the robot first with how it looks, the face, so if you could replicate the detail of the face of a human being, that would be a good way to boost interaction with a human being”.

Nie added that the realistic robot skin could also help when it comes to testing medical and cosmetic products. Most skin tissues that are used for testing currently don’t move this way, he said.

“[When] developing cosmetics that can ease wrinkles of your face or something like that, you have to simulate the skin in a way that [it] folds”.

”We think our technology provides this, so you can make those foldable skin equivalents to test whether the cosmetics work,” he said, adding this may be achievable in the next three to five years.

Skin-covered robots on the horizon?

Another use case the scientists can foresee is to improve the sensitivity of robots.

“There are many functions the skin provides that robots don’t have,” said Nie.

Although sensors are getting smaller every year, the technology does not currently exist to allow robots to feel subtle, human-like sensations such as itching or soft touch.

“To make a robot that feels what a human feels,” said Nie, you could develop technology that would be incorporated into the living skin.

And one thing the team has seen is possible is for the living robot skin to be healed once damaged.

The researchers write that they have “demonstrated that the wounded dermis equivalent covering the robotic finger can be repaired by grafting and culturing a collagen sheet onto the wound site”.

However, this idea of having a humanoid robot completely covered in living skin that can heal itself is decades away, and would require “a huge advancement of biology,” Nie acknowledged.

How a new breed of robots could revolutionise the workplace