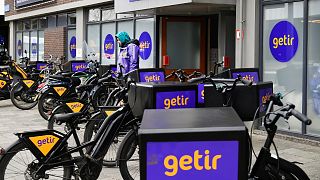 UK-based firm Zapp said it too was considering redundancies across the country, while Berlin-based Flink has also slowed hiring.

Investors poured billions into these firms, which promised quick delivery of groceries from small fulfilment centres known as dark stores.

But the cost of living crisis as well as supply shortages due to the war in Ukraine is forcing industry leaders to reconsider their options, with outside investment drying up.

Here are some of the instant delivery start-ups now firing couriers, and why it matters.

The Turkish company Getir, which employs over 6,000 worldwide according to LinkedIn, told its staff on May 25 that it planned to reduce its global headcount by 14 per cent.

In a statement emailed to employees, the company said: “With a heavy heart, we today shared with our team the saddening and difficult decision to reduce the size of our global organisation”.

“We will also decrease spending on marketing investments, promotions, and expansion,” it said.

A company spokesperson told Euronews Next the headcount reduction would vary by country, without giving further details but adding: “We do not take these decisions lightly”.

“This is one of the most difficult days since we founded Getir because we had to make tough decisions about our people organisation that will adversely affect some of our team members,” the spokesperson said.

Getir’s main rival, Berlin-based Gorillas, also announced on May 24 that it was letting go of 300 of its employees. The “extremely hard decision” was due to a need to reach profitability in the long run, it said in a statement.

The firm hinted it was also weighing up the possibility of pulling its operations out of a number of select countries - among them Spain, Denmark, and Belgium - in order to shift focus on more profitable markets in the UK, US and Germany.

Gorillas said these were “necessary moves” to help the company “become a stronger and more profitable” business with a “sharpened focus”.

Another grocery start-up, London-based Zapp, confirmed on May 25 that it is considering axing 10 per cent of its staff, saying the “macroeconomic climate has become incredibly challenging, with very little visibility of when things will improve”.

A final decision has yet to be made, with a consultation underway with employees based in the UK.

Zapp did not respond to a request for comment.

The recent turn towards redundancies across firms in the industry highlights a shift in investor sentiment towards high-growth tech companies.

Tech, as a whole, is in decline amid a sharp plunge in global stock markets after a remarkable bull run which reached its peak earlier this year.

High inflation, coupled with an end to COVID-19 lockdowns and supply chain issues exacerbated by the war in Ukraine, are impacting the sector - and hitting fast grocery delivery companies especially hard.

Many have been largely propped up by venture capital and, despite their boom over the last couple of years, have had an uncertain road to profitability.

Like other companies of its kind in Europe, Gorillas quickly caught the eye of investors - raising $1.3 billion (€1.21 billion) in venture capital funding from the likes of Tencent, DST Global, Coatue and Delivery Hero.

However, according to a report by Sifted, a news website backed by the Financial Times, the company has struggled to raise additional financing.

"If private market capital is no longer willing to back the business model, then a company needs to rely on its own cash generation ability," said Citi analyst Monique Pollard.

Despite the apparent difficulties these firms are now facing, some investors say there is still a solid business case for groceries on demand.

"We are seeing slower rollouts of new dark stores, lower levels of marketing investment, and diminished discounting from competition," he said.

"So aggregate growth is slowing down, but economics for the space are healthier".

Illg, in a presentation to investors earlier this year, said he sees the lines blurring between restaurant food delivery, grocery delivery, and quick commerce.

"I think you're going to see different variants of this across the world, across the different inventory mixes and business models," he said.

He said that there is no one business model for food delivery, but that some mix of hot meal delivery, convenience delivery, and slower grocery delivery companies will succeed in each country over time.

"So every country will have multiple players, but do they need six? Probably not. Do they need two or three? Yes, and I think that's where it will come out."

A push by big, well-known meal delivery companies like Deliveroo, Just Eat Takeaway and Uber Eats into the grocery space is already happening, as those firms strike delivery deals with convenience stores and grocery chains.

Germany's Delivery Hero has also agreed to take a controlling stake in Spain's Glovo in a deal valuing the company at $2.6 billion (€2.4 billion) that is expected to close later this year. Both have quick grocery operations.

Other delivery firms have bulked themselves up through acquisitions within the industry, with Flink buying France's Cajoo for an undisclosed sum last month.

So what does this industry reshuffle mean for delivery workers - the ones rushing to get groceries bagged and delivered to doorsteps within minutes?

An anonymous delivery driver for Getir told Euronews he and his colleagues were “worried about the latest news and the direction the industry is going”.

He’s clearly not the only one.

The App Drivers and Couriers Union (ADCU) is providing legal and financial support for workers across the industry who face redundancy in the UK.

Fast-grocery firms should be mindful that “a lot of people employed by these companies have this as their main source of income,” Yaseen Aslam, president of ADCU, told Euronews Next.

“[Courier drivers are] mainly migrant workers, from a community of minority people - they really need protection,” he said.

“Cost of living is going up – workers need job security; they need sick pay; they need pensions. This is incredibly important”.