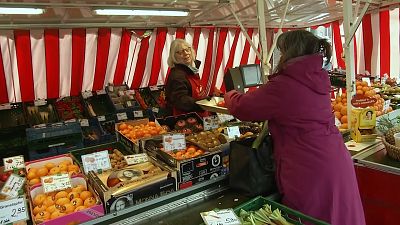 This week's Real Economy takes a look at how Russia's war in Ukraine is impacting Europe's economy and asks what next?

The EU27 and eurozone economies had been on a path of strong recovery and growth coming out of the pandemic, but the EU has recently cut its forecast for growth and hiked its inflation forecast.

A new surge in energy prices, linked to Europe's dependence on Russian energy is driving inflation to record highs.

Ukraine and Russia produce almost a third of the world's wheat and barley and are major exporters of metals. Disruptions to these supply chains as well as rising costs for many raw materials have pushed up the cost of food and other basic goods and services.

This puts a strain on businesses and less money in consumers' pockets. The EU has therefore cut its economic growth forecast: real GDP growth in both the EU and the euro area is now expected to reach 2.7 percent in 2022 and 2.3 percent in 2023, down from 4.0 percent and 2.8 percent (2.7 percent in the euro area), respectively, from the winter 2022 interim forecast.

Inflation - forecast at 3.9 percent just a few months ago - is now expected to average at 6.8 percent.

The cost to Germany

The war is hurting some EU economies more than others. Germany’s growth forecast is one of the lowest in Europe at 1.6 percent.

Germany’s Mittelstand, or mid-sized companies, are its economic backbone. But this eco-system of local firms is also heavily dependent on neighbouring countries, including Ukraine.

Five kilometres -that’s the average length of cables inside your car. And if your car is made in Europe - about seven percent of that comes from Ukraine.

In 2021, the European Union imported 760 million euros-worth of Ukrainian cable. Most of that went to the car industry, but the aerospace sector is also reliant on it.

While Rocket Factor Augsburg (RFA) doesn’t get its supplies directly from Ukraine, when Russia invaded its neighbour in February, the company's whole supply chain was turned upside down.

RFA's co-founder Jörn Spurmann describes how the disruption is taking its toll.

Spurmann and RFA are due to launch the company's first rocket into space in 2023. If they are to keep to that schedule they will need to get creative. The company is now adapting parts and components produced for other industries, to use in their rockets, as these are easier to get hold of.

"There are suppliers who are coming back with higher pricing or longer lead times...And then we need to find alternatives. There are always alternatives. We don't have any single sources, but this requires more time and more effort definitely on the supply chain management on our side," explains Spurmann.

The aerospace industry is not the only sector affected by this supply chain disruption. After two years of pandemic, the long-awaited economic recovery is now in the balance, especially with people in Europe feeling the pinch due to the rising cost of living.

The European Commission has forecast an inflation rate of 6.5 percent for Germany this year - a record high since the country’s reunification in 1990.

"Households are losing power in consumption. So they will have to scale back. For the companies, it's a relative loss of competitiveness, especially for the companies who are located in Germany. We have to bear the burden of these higher energy prices and they can pass it on to a certain extent, but not all of it."

As growth stalls and prices rise, the EU hopes that its 800 billion euro pandemic recovery plan will help contain the situation.

But economic clouds of uncertainty are likely to remain in the weeks and months ahead as the war continues to rage in Ukraine.

"Has the war in Ukraine fundamentally changed the economic outlook for Europe, or has it more exaggerated economic issues that were already there?"

"I think probably the latter. It has exaggerated certainly when it comes to inflation. The reason why we're seeing all this inflation is that energy and energy coming from Russia. It’s affected Europe a lot more than it has affected the US because we depend on Russia a lot more than others do. It depends of course on the outcome of the war and how quickly we are going to find alternatives in Europe. Obviously, we can't do it overnight. On the outlook for growth, I think we are coming out of a pandemic where, dare I say we are still in the pandemic, but at least the economy's coming out of the pandemic. We had huge increases in growth as a result of that. That has now been tamed a little bit, but we don't see a fundamental change there."

"The cost of living, the cost of food is rising. Should we just be prepared for more of this?"

"I think yes. I think we certainly are going to have another year of this in terms of the inflation being abnormal. We have seen here in Belgium, where I live, an increase of flour, a doubling of flour, which, of course, has got implications with the price of bread, quite important. We’ll feel it in our pockets when we will fuel our cars, when we buy our weekly food. And I dare say that things probably need to get a little bit worse before they get better. So in that respect, I think we really need to brace ourselves for a little bit more of this."

"Is this higher inflation a genuine concern, or is it just that we're nervous after such a long period of low inflation?"

"Well, I think it depends what you compare it to. If you compare it to the past ten years - yes, that's kind of, we got used to very low rates of inflation. But it's not a problem if you compare it to the 1970s when we're talking about real stagflation and inflation rates of 15 percent and negative growth. We don't have these numbers now. I don't expect to see those numbers even in the worst-case scenario. But of course, we should stay short of forecasting these types of things. Very difficult to forecast."

"Do we need to see interest rates going up?"

"I think it's going to be very difficult for the ECB not to increase interest rates or indeed other central banks that have to manage their interest rates when we are seeing inflation of their orders of magnitude that we're seeing."

"How concerned are you about Europe's economy right now?"