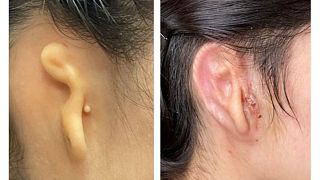 The patient's ear before the surgery, left, and 30 days after the surgery, right.   -   Copyright  Courtesy of Dr Arturo Bonilla, Microtia-Congenital Ear Institute
By Natalie Huet  •  Updated: 04/06/2022

A US company has fitted a patient with a 3D-printed ear implant made from living cells in what it described as a medical breakthrough.

The patient is a woman born with a congenital defect that left her with a small and misshapen right ear.

The company, 3DBio Therapeutics, took a sample of cartilage cells from her ear remnant and grew them in a New York lab.

The collagen was inserted into a special 3D bioprinter, which squirted out the material layer by layer to create an oblong shape that was a mirror replica of the patient’s left ear.

A surgeon implanted the 3D-printed ear under the patient’s skin, and after the skin tightened around it, the shape of an ear appeared.

“We believe this is the first time that a company has printed a whole living engineered construct and implanted it into a patient to replace a body part that the patient was either born without or is lost due to trauma or disease,” said 3DBio’s CEO and co-founder Daniel Cohen.

The company hopes the technology could eventually be used to make other replacement body parts, including noses and spinal discs.

For now, a clinical trial is underway in 10 other patients with microtia, a rare congenital ear deformity where one or both outer ears are absent or underdeveloped.

The new technology requires less invasive surgery than is currently needed for reconstruction, as surgeons normally harvest cartilage from the patient’s ribs, and then carve that cartilage to give it the shape of an ear.

“I'm deeply inspired by what could potentially come of this,” he said. “I've actually been waiting for this my whole career”.