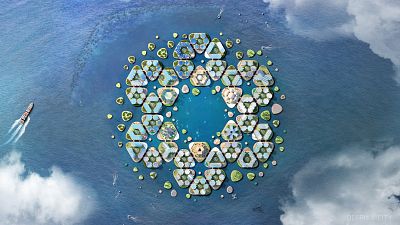 As climate change and rising sea levels put coastal communities around the world at risk, the United Nations is betting on technology to build resilient “floating cities”.

Oceanix, a “blue tech” company based in New York, has designed a flood-proof pilot project it says could bring safety to millions of people.

In partnership with UN-Habitat, the company is now ready to start building the first prototype in Busan, South Korea.

Around 40 per cent of the world’s population lives less than 100 km from the coast, and rising sea levels are threatening 90 per cent of mega cities worldwide, according to the UN.

Flooding is destroying billions of euros worth of infrastructure and forcing millions of climate refugees to leave their homes. But with rapid urban population growth and nowhere to expand in these coastal cities, housing costs are skyrocketing.

Oceanix co-founder Itai Madamombe believes the company's model of floating cities could be an environmentally sustainable solution to those challenges.

“With floating infrastructure, what we are advocating is that we can live in harmony with nature. We don't have to destroy what's underneath it. We can live on top, and life below water continues,” she told Euronews Next.

The cities’ foundations will be built with concrete that is friendly to the water.

“We are using bio rock, a technology that rehabilitates and regenerates the water and marine life. We can build coral reefs using this technology,” Madamombe said, adding Oceanix is also working on using 3D ocean farming to supply the cities while preserving marine biodiversity.

Less waste and no cars

“The challenges that we face in developing floating infrastructure are not technological engineering challenges,” Madamombe said.

“What is new and challenging is making them self-sustaining right across all of the six systems that we have - energy, water, food, waste, mobility, habitat regeneration - and integrate the systems in a way that they can work efficiently,” she added.

The cities will rely solely on the solar, wind, sea and wave energy they will produce. They will also harvest and filter rainwater for freshwater.

Oceanix is working with the Centre for Zero Waste to ensure that any waste created on the island can be reused.

“We will try to share as much as possible, especially around mobility. For example, we will have innovative and shared mobility. There will be no cars on our floating cities”.

The structures are made of single platforms that are then integrated together, meaning that the structure can evolve and adapt to the city’s needs.

“So on land, if you build a school or a hospital or housing, wherever you built it, then you are pretty much stuck with that structure arranged in that way," she explained.

“But what's amazing about floating cities is that [...] if where you had put the school no longer works for you, you could simply unplug and rearrange, literally reconfigure the entire city to respond to the needs of the community or the whole city,” Madamombe said.

And because of the way they are built, the cities as a whole can also be moved.

“This is not something that you would do every single day, [but] if you decided that the position where you put the city is not the best place for any number of reasons or changes, you could actually unplug the whole city and move to a different location,” she said.

Oceanix’s ambition is to create a city of 10,000 people. For now, the company will start with the creation of a prototype in Busan, for which it hopes to start construction next year. And if all goes well, the first residents will be able to move in early 2028.

This hidden greenhouse grows plants for all of London's Royal Parks

Why is Turkey being given a green loan of €300 million?