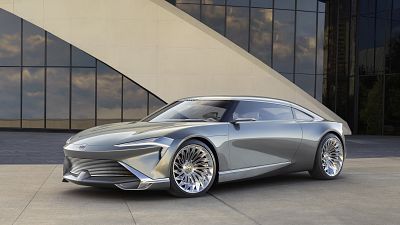 Buick may have the reputation as an American chunky classic fit for the older gentleman, but it is getting a serious electric rebrand.

The carmaker, owned by General Motors, announced major changes as it shifts gears to electric vehicles.

Buick said it will release its first EV for the North American Market in 2024 and by the end of 2030, will only sell EVs.

Its cars of the future will be called “Electra”, a former vehicle name used by the brand for decades until 1990.

Buick has also unveiled its concept car, the “Wildcat”, a name it has also used in the past for other concept and production cars in the 1960s and 1970s.

“Buick has always been forward-looking and this expression is a glimpse of where we’re going, and the optimism we have for the limitless possibilities of an electric future”.

Though the 119-year-old brand is nodding back to the past, the company is trying to shake off its image as a maker of vehicles for senior citizens and attract younger buyers.

The company is also updating its logo. The tri-shield logo will no longer be in a circle but separate.

Buick is the last of the four vehicle brands owned by GM (Chevrolet, GMC, and Cadillac are the other three) to unveil its EV plans.

GM said it will spend $35 billion (€32 billion) on electric and autonomous vehicles by 2025 and aims to become a completely carbon neutral company by 2040.