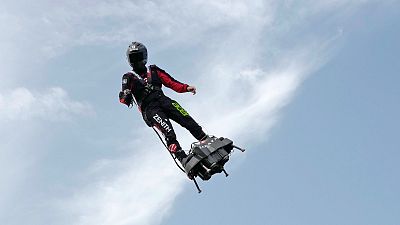 French jetpack inventor Franky Zapata has praised emergency services and reassured concerned fans after he crashed into a lake with his “flyboard” .

“I am good,” Zapata said in a social media post in French on Sunday, as he thanked emergency responders who had attended to him following the incident in the southwestern French town of Biscarrosse.

Zapata, who famously crossed the English Channel in 2019 on the jet-powered hoverboard of his own design, had been taking part in an exhibition event on Saturday when he appeared to lose control of his device.

Video footage posted on social media showed him rising and spinning in the air on his invention, called a flyboard, before plunging into the lake below.

He was taken to hospital conscious, Sud Ouest reported, and officials later told local media that he showed “good sensitivity and motor skills”.

Zapata sounded an upbeat note in his social media update, tweeting that the incident “reminds us that we are not birds, and that if we are not excellent, it’s gravity that wins”.

“We only learn through mistakes, and we cannot think to change mobility without taking a few,” he added.

The French inventor previously featured in France’s 2019 Bastille Day celebrations, during which he soared over a military parade in Paris on his invention.

The Swedish-built electric 'flying car' designed for anyone to fly