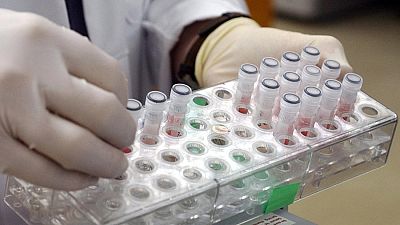 A number of countries have announced plans to make monkeypox vaccines accessible for targeted parts of the population.   -   Copyright  AP Photo   -
By Jack Ramage  •  Updated: 27/05/2022

A growing number of Western countries are facing an unusual outbreak of monkeypox, a virus related to smallpox that's typically limited to Africa.

The virus which is less deadly than smallpox typically lasts for two to four weeks and symptoms can appear anywhere from five to 21 days after infection.

According to the US Centers for Disease Control and Prevention (CDC), when properly administered before exposure to the virus, vaccines are effective in protecting people against monkeypox.

Monkeypox and smallpox are closely related - the CDC notes that an existing smallpox vaccine is "at least 85 per cent effective in preventing monkeypox".

Although smallpox was eradicated in 1980, stockpiles of vaccines have been maintained around the world to protect people against a possible resurgence.

How many monkeypox vaccines are there?

Currently, there are two licenced vaccines in the US used to protect people from smallpox: ACAM2000 and Jynneos - also known as Imvamune or Imvanex.

Jynneos is a vaccine used for protecting people against smallpox and monkeypox. This version of the vaccine is live and non-replicating, meaning it is safer for those who are immunocompromised.

Who makes the vaccines?

There are claims circulating online that Pfizer received FDA approval for a new monkeypox shot the day after the US purchased millions of dollars worth of vaccines for the disease. This has been proven false by fact-checkers at the Associated Press (AP).

Jerica Pitts, a Pfizer spokesperson, told the AP in an email that Pfizer does not make a vaccine to target monkeypox.

Jynneos is developed by the Danish company Bavarian Nordic and is the only FDA-approved vaccine for monkeypox in the US.

Moderna said on Monday it will research vaccines to prevent monkeypox with plans to begin preclinical testing of candidates targeting the virus.

Which countries are stockpiling vaccines?

The World Health Organization (WHO) stated on May 23 that the recent monkeypox outbreak does not require mass vaccinations, citing that measures like hygiene and safe sex will help control transmission.

However, a number of countries have announced plans to make monkeypox vaccines accessible for targeted parts of the population.

At the time of publication, a total of over 250 confirmed cases were reported by WHO, with a geographical spread that is unusual for the disease.

118 cases of monkeypox have been confirmed by 12 EU/EEA Member States - according to data by the European Centre for Disease Prevention and Control (ECDPC) reported on 25 May.

France’s health authority recommended starting a targeted vaccine campaign against monkeypox on 24 May. The recommendation for vaccination extends to at-risk adults who have been in contact with a patient confirmed to have the virus.

Health staff who have also been exposed to a patient infected with monkeypox should also receive a vaccine, the health authority added.

There are currently three generations of the monkeypox vaccine. The second and third use the vaccinia virus, which is another orthopoxvirus that corners immunity against monkeypox but can have serious side effects in a few people - especially for those who have compromised immune systems.

The third generation of the vaccine does not replicate in the body and is therefore suitable for those who are immunocompromised.

Third-generation monkeypox vaccines (Jynneos vaccines) should be given ideally within four days and up to 14 days following exposure to monkeypox, the French health authority said.

On 24 May, Germany ordered 40,000 doses of the Jynneos vaccine to be administered to contacts of those who have been infected with the monkeypox virus if the outbreak in the country becomes more severe, with more cases recorded.

On May 25, Denmark announced it would receive 200 monkeypox vaccines from the Netherlands and was working on buying thousands more as the country mulls vaccinating close contacts of those infected.

Spain also said it would purchase the Jynneos vaccine however it has not yet specified the number of doses.

The UK Health Security Agency (UKHSA) said the vaccine will be offered to identified close contacts of people diagnosed with monkeypox. It also stated that the risk to the general population was low.

On 27 May, Sweden's vaccine coordinator said that The European Union has decided on common purchasing of a vaccine and antiviral to fight the outbreak of monkeypox. The paper said the EU would buy Bavarian Nordic's Imvanex and Tecovirimat from Siga Technologies in the United States.

On May 23, the US said it was in the process of releasing some Jynneos vaccines for use in monkeypox cases. Officials said there were more than 1,000 doses of the vaccine in the national stockpile and they expected that level to ramp up very quickly in the coming weeks.

Canada said it has started pre-positioning the Jynneos vaccine from its national emergency stockpile, on 25 May, with a small shipment of the vaccine sent to Quebec on May 23.

Health officials across the world are keeping a close eye on the situation, as the virus appears to show community transmission, meaning it is showing in people who did not travel to the regions in Africa where monkeypox is endemic.

However, the medical community stresses the risk to the general population remains low.

Europe at 'epicentre' of monkeypox outbreak, WHO says

A young person's game? A third of over 50s are investing in crypto