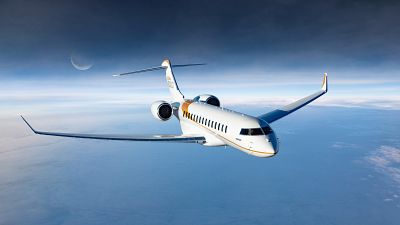 Bombardier has unveiled what it says will be the fastest passenger jet since the Concorde, with the plane being pushed past the speed of sound in testing.

The Global 8000 aircraft will also be the world’s longest-range business jet, according to the manufacturer, with a range of 8,000 miles, allowing it to serve routes such as Singapore to Los Angeles and London to Perth, Australia.

On Monday, the company revealed details of the aircraft, which went supersonic during testing last year while being escorted by a NASA FA-18 support craft, which are sometimes used for testing commercial aircraft as well as for data gathering for space-based missions.

It repeatedly reached speeds in excess of Mach 1.015, which he company said was a key step in enabling its max speed of Mach 0.94 - just under the speed of sound - making the aircraft “the fastest business jet in the world and the fastest in civil aviation since the Concorde”, the company said.

Bombardier also said during that demonstration flight it became the first passenger plane to fly supersonic with sustainable aviation fuel.

One of the big barriers to supersonic and near-supersonic passenger travel since the Concorde was retired in 2003 has been the huge emissions caused and fuel requirements, at a time when the airline industry is reckoning with its own climate commitments.

The Global 8000 is expected to enter service in 2025, with its development currently “going to plan”.

Bombardier’s CEO, Éric Martel, said the Global 8000 will provide “customers with a flagship aircraft of a new era”, claiming the company remains “unmatched”.

Those customers will likely have to fork out for a place on a Global 8000, with the plane carrying a maximum of 19 passengers.

One of the classes included is the Principle Suite, with a full-size bed with an en-suite which is equipped with a standup shower.

The return of supersonic passenger travel?

There hasn’t been a supersonic option for high-flying consumer travelers since the Concorde was grounded.

While the Global 8000 will not be flying faster than the speed of sound outside of testing, United Airlines is one airline hoping to offer customers supersonic travel speeds this decade.

Planned to take flight with passengers in 2029, the Boom Overture would be the first supersonic aircraft to fly for a commercial airline since Concorde.

United is the first US airline to place an order for the jets which promise to cut flying time to over 500 cities by half, according to the airline.

Overture maker Boom claims that the aircraft will have net-zero carbon emissions and will be capable of flying on 100 percent sustainable aviation fuel (SAF), which is produced from sources like waste products.