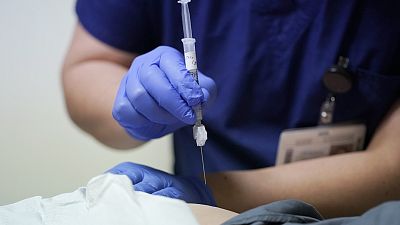 Ray Hoffman, who is immune-compromised, is given a shot of the two-shot dose of AstraZeneca's Evusheld — the first set of antibodies grown in a lab to prevent COVID-19.   -   Copyright  Ted S. Warren/Associated Press
By David Walsh  •  Updated: 24/05/2022

While COVID-19 has not yet officially been declared over, this year’s World Economic Forum (WEF) meeting in Davos is already analysing the black box data from the pandemic to find ways to future-proof the world against another global health crisis.

Lessons from the pandemic will be hard to learn, as the world counts more than 6 million people lost to the virus or COVID-19-related illnesses.

Vaccines have enabled a large part of the world to reopen in recent months, but how best to manufacture, roll out and fairly distribute them as well as COVID-19 treatments have caused soul-searching among drugmakers, including British-Swedish pharma giant AstraZeneca.

Making vaccines from scratch takes a long time, up to a decade or more for some.

AstraZeneca produced its vaccine - now marketed as Vaxzevria - in just 10 months with the University of Oxford. It is this spirit of co-operation and what it can achieve that Iskra Reic, Executive Vice President of AstraZeneca’s Vaccines and Immune Therapies Unit, describes as one of the most valuable takeaways from the pandemic.

"I think the very important lesson, and I think it goes beyond AstraZeneca and is for many different healthcare stakeholders - is the importance and the value of the public-private partnership," she told Euronews Next at Davos.

"I think that what we delivered with the AstraZeneca Oxford vaccine… 3 billion doses wouldn't be possible without the strong partnership, both with the University of Oxford, but equally with a number of the suppliers and manufacturers across the globe that helped to achieve our goal, which was the broad and equitable access".

Providing equitable access, however, is a goal that is far from being achieved, with many middle- to low-income countries lacking vital vaccine supplies. In Africa, for example, the rate of vaccination was 35.92 per 100 people by 2022, according to Statista, compared to 195.8 per 100 in the European Union.

The question of what more pharmaceutical companies should be doing to improve this has become a hot topic at this year’s WEF, particularly behind closed doors.

There is more for us to do in engaging with governments, non-profit organisations, and other healthcare authorities to help and to support the last mile and delivery of the vaccine.

Where does AstraZeneca feature in all this and what has it done so far to alleviate the problem?

"I think a lot has been done. And I think you are right raising the question because an important point is now this last mile of how to make sure that people are actually getting the vaccine and are they actually vaccinated," Reic said.

"You have 17 per cent of the population in Africa that is actually vaccinated. So, there is more for us to do in engaging with governments, non-profit organisations, and other healthcare authorities to help and to support the last mile and delivery of the vaccine".

"A good example is probably a recent initiative in Kenya that we are also very happily supporting between CDC [Foundation] and an initiative called mPep, where they're looking at the innovative mobile clinic that will actually help them to access the patients in the population the most remote areas and increase the rate of the of the vaccination," she explained.

Efforts to boost vaccination rates have been further hampered by misinformation and a rising global anti-vaccination movement. For Reic, it remains a question of education but one that pharmaceutical companies need to be part of in order to restore trust.

"I think there is definitely a role that pharma, as well as other stakeholders, have to play in education and awareness of the importance of the vaccination,” Reic said.

"I think it's a fact that we wouldn't be here standing today in Davos if there were no vaccines".

What did become apparent during the pandemic, Reic said, was the resilience of healthcare systems which were pushed to breaking point by the escalating crisis.

"I think we all witnessed that healthcare systems were significantly impacted and almost broken in many ways during the COVID-19 pandemic," she told Euronews Next.

"And I think that was also important learning what we can do to make the healthcare systems more sustainable and resilient".

I think we learned a lot that we can apply to diagnose and treat patients better, early diagnostic and early treatment then the costs are much lower and patients outcomes so much better

There were, however, efforts during the pandemic to achieve this which will now help future-proof the healthcare systems of countries around the world, including the creation of the Partnership for Healthcare, Sustainability and Resilience in 2020.

Initially bringing together the WEF, the London School of Economics, and AstraZeneca, the platform has now spread to more than 20 countries around the world. Its purpose now?

"To really look at what are the key pain points and the hurdles of each and every healthcare system in order to make them more resilient for any potential future crises, but equally more sustainable," Reic said.

"And from a long-term perspective, because it's not only the crisis we need to get ready for, I think we learned a lot that we can apply to diagnose and treat patients better, early diagnostic and early treatment then the costs are much lower and patients outcomes so much better".