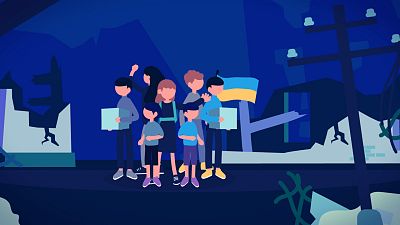 The bloc has freed up several billions in unused money for Europe’s regions to be spent on emergency help for Ukrainian refugees. Known as the Cohesion Funds, this includes finance from the European Social Fund and FEAD, the European Fund set up to help the most deprived.

It can be spent on things such as temporary accommodation, food, blankets and clothing, psychological counselling, medical care and education. And national governments can claim back money already spent. In addition, 10 billion euros of pandemic recovery funds known as REACT-EU is available.

What urgent assistance is the EU giving to Ukrainian refugees?

In an historic move, the EU has given Ukrainian refugees the right to live and work across the EU for up to 3 years, under the Temporary Protection Directive. It includes access to healthcare, education and housing and the right to move freely in EU countries.

An estimated 6 million Ukrainian refugees have crossed the border into Europe. To help EU countries deal with the immediate and urgent expenses of hosting these refugees, the European Union has adopted a regulation called CARE which stands for Cohesion’s Action for Refugees in Europe.

CARE enables EU countries to use unspent and unallocated money amounting to several billion euros from the Cohesion Funds 2014-2020 budget.

The Cohesion Funds include finance from the European Social Fund (ESF) and Fund for European Aid for the Most Deprived (FEAD) and provides money for investment in the EU’s regions.

How much money will EU governments actually get?

The European Commission estimates that the total funding unlocked by CARE will be around €17 billion. Governments are entitled to claim back money already spent since the beginning of Russia’s military aggression in Ukraine.

€3.5 billion from the €10 billion REACT-EU has already been paid out so that countries have immediate finance. Member states hosting the highest number of refugees have received the greatest share of this.

What is the money being spent on?

As well as help cover the costs of temporary accommodation, food and water supplies and blankets and clothing, the funding can also be used for services such as psychological counselling, medical care and education as well as training, language courses and childcare.