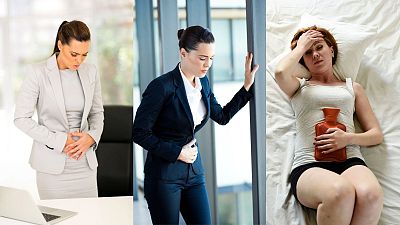 Spain's government has greenlit plans to allow women to take unlimited paid "menstrual leave" from work, in a European first.

The proposal endorsed by ministers on Tuesday is part of a broader package on reproductive rights that includes allowing teenagers to seek an abortion from the age of 16 without the need to get their parent or guardian's consent.

The government has agreed on the draft law which will still need to be passed by Spain's parliament, a legislative process that could take several months.

Leaked reports last week suggested three to five days would be offered to those experiencing severe period pain, but the government announced there will be no limits placed on the number of days a woman can take.

Under the agreed plans, women would need to obtain a doctor's note, with leave being paid by the country's social security system from their first day off work.

'A lightning rod for feminists'

Spain's equality minister Irene Montero, an outspoken feminist in the leftwing government, said it was time for government institutions to "discard taboos, stigmas and guilt regarding women’s bodies".

"The days of (women) going to work in pain are over," Montero told a press conference that gave details of the draft health bill following a cabinet meeting.

But the issue is proving controversial. Politicians - including those within Spain's ruling coalition - and trade unions have been divided over a plan some fear could backfire and stigmatise women in the workplace.

Worldwide, menstrual leave is currently offered only in a small number of countries including Japan, Taiwan, Indonesia, South Korea and Zambia.

Italy flirted with the idea in 2016, proposing a bill that would have given three fully paid days off to workers who obtained medical certificates, but the proposal failed to progress before the parliamentary term ran out in 2018.

"It's such a lightning rod for feminists," Elizabeth Hill, an associate professor at the University of Sydney who has extensively studied menstrual leave policies worldwide, told Euronews Next.

The debates around menstrual are often intense, she said, with concern focused on whether such a policy can help or hinder women.

"Is it liberating? Are these policies that recognise the reality of our bodies at work and seek to support them? Or is this a policy that stigmatises, embarrasses, is a disincentive for employing women?"

We are not talking about a slight discomfort, but about serious symptoms such as diarrhoea, severe headaches, fever

According to the Spanish Gynaecology and Obstetrics Society, around a third of women who menstruate suffer from severe pain known as dysmenorrhea.

"When the problem cannot be solved medically, we think it is very sensible that there should be temporary incapacity associated with this issue," Ángela Rodríguez, Spain’s Secretary of State for Equality and against Gender Violence, told El Periodico newspaper in a recent interview.

"It is important to clarify what a painful period is, we are not talking about a slight discomfort, but about serious symptoms such as diarrhoea, severe headaches, fever," she added.

The introduction of paid period leave in Spain is not yet a done deal, and the country's left-wing coalition government itself has reportedly been divided over the plan.

While the far-left party Podemos has been pushing for it, some Socialists have voiced concern a menstrual leave could backfire against women by discouraging employers from hiring them.

In the long term, it may be one more handicap that women have in finding a job

Cristina Antoñanzas, deputy secretary of the UGT, a leading Spanish trade union, even warned that the move could "stigmatise women".

"In the long term, it may be one more handicap that women have in finding a job," she told Euronews Next.

"Because we all know that on many occasions we have been asked if we are going to be mothers, something that must not be asked and that men are not asked. Will the next step be to ask us if we have period pains?"

Antoñanzas complained that labour unions were not involved in the government’s discussions.

"When legal measures and changes are put on the table, the impact on women must be analysed very carefully. We don't know whether companies will accept it or not," she said.

Devil in the details

"We think it will help women," Carolina Vidal, its confederal secretary for Women, Equality and Working Conditions, told Euronews Next.

"We have been fighting all our lives against stigmatisation by society, politics and the economy. Do we now have to hide because we are women and have painful menstruation? This is contrary to feminism. We must not have to go to work in pain".

We have been fighting all our lives against stigmatisation by society, politics and the economy. Do we now have to hide because we are women and have painful menstruation?

However, Comisiones Obreras raised concerns over the details of the proposal, particularly the fact that women would have to prove they suffer from a condition known to worsen period pain - such as endometriosis or polycystic ovary syndrome - to claim this menstrual leave.

"How many women are we leaving out?" Vidal said.

"In many, many cases periods become unbearable and disabling, but they are not considered illnesses".

The measure is part of a package of proposals that will be sent to the Spanish parliament for debate.

The broader health bill includes an extension of abortion rights, scrapping the requirement for 16- and 17-year-olds to obtain parental consent before terminating a pregnancy.

The draft law will also lower VAT on feminine hygiene products in shops and make period products available for free in social and educational centres.