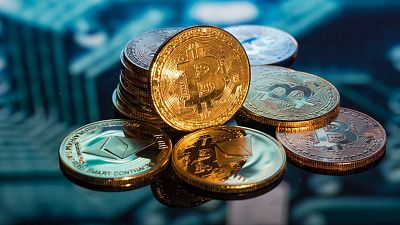 So-called stablecoins are sending shockwaves around the markets, causing liquid cryptos such as Bitcoin to crash.   -   Copyright  Canva
By Pascale Davies  •  Updated: 15/05/2022

So-called stablecoins are sending shockwaves through the cryptocurrency markets, wiping billions off their value, causing liquid cryptos such as Bitcoin to crash and people to lose their savings.

The two main stablecoins from the crypto project Terra have gone into free fall with some calling the incident a Ponzi scheme akin to collapse of Lehman Brothers which precipitated the 2008 financial crisis.

Stablecoins claim to be a relatively safe haven in the highly volatile crypto market. They are meant to be tied to a fiat currency and usually maintain a 1-to-1 peg with the US dollar. But recent events have proven that they are just as volatile as other cryptocurrencies.

The stablecoin TerraUSD, or UST, crashed almost completely at one point on Thursday and lost its $1 peg (€0.96) to the dollar, tanking to a low as $0.26.

Terra was ranked among the 10 most valuable cryptocurrencies and peaked at almost $120 (€115.28) last month.

Meanwhile, TerraUSD’s sister token Luna fell by more than 97 per cent on Wednesday, dropping below $0.22. By Friday, Luna collapsed to nearly $0.

How did the crash happen?

UST, created by Terraform Labs, is an algorithmic stablecoin, which means that instead of having cash and other assets held in a reserve to back its token, it uses a complex mix of code and Luna to stabilise the process.

Crypto is full of gullible people who are sure there's a lot of money in Ponzinomics and they will get rich even though those other fools will lose their money.

“The idea of an algorithmic stablecoin is instead of having a backing reserve you have a sort of messy, a lower quality banking reserve. It's a way to claim that you're building a stable thing out of unstable things,” said David Gerard, the author of the book Attack of the 50 Foot Blockchain.

Things were made even more complicated after Terra’s creator Do Kwon purchased $3.5 billion (€3.3 billion) worth of Bitcoin to support UST in the event of a crisis.

The company said “very little” of the borrowed Bitcoins have been spent, but it is “currently being used to buy” UST. Many worry that the Luna Foundation Guard will sell a large part of its Bitcoin to support UST.

“I think the compelling aspect of this story is they did a small 2008 financial crisis themselves,” said Gerard.

“In the 2000s, when money was great, people had so much money, they couldn't even invest it fast enough. They said what's safer than real estate? Real estate doesn't go down. So let's bet on mortgages and loans based on mortgages. And so you had equivalents backed by a derivative of the price of that house,” he added.

The key thing about the US story, apart from the fact they did a small 2008... is that everyone knew this was nonsense.

House prices of course did come down and then all these safe dollar equivalents collapsed with them and then everyone depending on those collapsed.

Gerard said this is much the same as what happened with Terra.

“It was based on nonsense and had Bitcoin effective at the bottom and they actually crashed the price of Bitcoin and that crashed all the other cryptos  because they're all correlated,” he said.

“So they did a small 2008. Change of leverage, overleveraged, collapsed and took the real asset with them”.

But the Terra saga has not just knocked the price of Bitcoin and Ether but also the world’s largest stablecoin, Tether which sank as low as $0.98 on Thursday and again is meant to have a $1 peg.

There are also concerns about if Tether also has enough assets to support its intended $1 peg. The company had said all its tokens were backed by dollars held in a reserve.

But after a settlement with the New York attorney general last year, it was revealed that Tether relied on a range of assets including commercial paper, a form of unsecured debt, to back its token.

With much doubt over how stablecoins are backed, it is likely regulation will come fast.

US Treasury Secretary Janet Yellen pointed out the TerraUSD as evidence of the potential threat to financial stability from unregulated cryptocurrency markets during a Senate Banking Committee hearing on Tuesday.

"A stablecoin known as TerraUSD experienced a run and declined in value," Yellen said.

"I think that simply illustrates that this is a rapidly growing product and that there are risks to financial stability and we need a framework that’s appropriate".

'I lost all my life savings'

But regulation is too late for the many that may have lost their life savings in this latest saga. Many users on Reddit shared their stories.

"I lost all my life savings," one member of the r/TerraLuna sub-Reddit wrote.

"The key thing about the US story, apart from the fact they did a small 2008 and it really wasn't a small quantity, is that everyone knew this was nonsense," said Gerard.

"It was obviously nonsense. But crypto is full of gullible people who are sure there's a lot of money in Ponzinomics and they will get rich even though those other fools will lose their money".