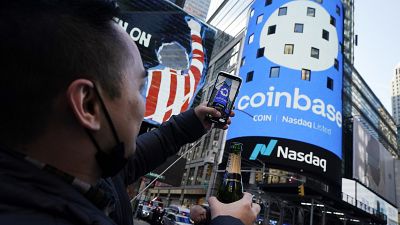 File-Coinbase employee Daniel Huynh holds a celebratory bottle of champagne as he photographs outside the Nasdaq MarketSite, in New York's Times Square   -   Copyright  Richard Drew/Copyright 2021 The Associated Press.
By Euronews and Reuters  •  Updated: 11/05/2022

Coinbase's chief executive said a disclosure in its latest quarterly filing did not indicate the largest US cryptocurrency exchange faced a bankruptcy risk, and it had been made to meet a regulatory requirement.

Brian Armstrong's comments on late Tuesday came after the company said in the event of bankruptcy, crypto assets held by the exchange could be considered property of the bankruptcy proceedings and customers could be treated as unsecured creditors.

An unsecured creditor would be one of the last to be paid in any bankruptcy and last in line for claims.

Coinbase said its disclosure might lead customers to believe that keeping their coins on the platform would be considered "more risky," which would in turn materially impact its financial position.

"We have no risk of bankruptcy," Armstrong said on Twitter after the disclosure. He said it was unlikely that "a court would decide to consider customer assets as part of the company in bankruptcy proceedings" although it was still possible.

Coinbase would take further steps to ensure it offered protection for its retail customers, Armstrong said.

"We should have updated our retail terms sooner, and we didn't communicate proactively when this risk disclosure was added," he said. "My deepest apologies".

Coinbase shares plunged 17.4 per cent before the bell on Wednesday after sliding 15 per cent in extended trading when the company's quarterly revenue missed market expectations and it swung to a loss as turmoil in global markets curbed investor appetite for digital currencies.

Its shares have plummeted 71 per cent so far this year, mirroring the drop in prices of major cryptocurrencies like Bitcoin.

Coinbase went public in April 2021. It blamed the weak results on a "continued . . . trend of both lower crypto asset prices and volatility that began in late 2021".

"We believe these market conditions are not permanent and we remain focused on the long term," the company added.