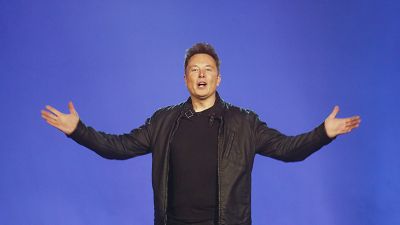 On Thursday, the Tesla boss announced that 19 investors were backing his purchase, including figures from across Silicon Valley, the cryptocurrency world and Wall Street.

The largest amount came from the Oracle co-founder and Tesla board member Larry Ellison with $1 billion. Other investors include crypto exchange platform Binance, a Saudi prince and venture capital firm Sequoia, which has backed other tech companies such as Apple and Google.

Other investment firms backing Musk’s bid include Qatar Holding, which is contributing $375 million, and Fidelity, which has pledged $316 million.

Binance CEO Changpeng Zhao said the company invested $500 million and called Musk’s Twitter purchase a step toward "Crypto Twitter" and a "small contribution to the cause".

Musk’s plans for Twitter are so far unclear, but he has said he would make Twitter a beacon for free speech so long as it complies with laws.

However, Musk has faced backlash for accepting money from Qatar’s sovereign wealth fund and having Saudi Prince Alwaleed bin Talal Abdulaziz Alsaud as an investor. Both countries have strong censorship rules.

In Saudi Arabia, government critics have faced arrest and many Twitter users have pointed out the 2018 murder of journalist Jamal Khashoggi, who was killed after he walked into the Saudi consulate in Istanbul. The Saudi government has denied any involvement by its leaders.

Prince Alwaleed, who is already a Twitter shareholder and initially rejected Musk’s deal, pledged to buy nearly 35 million shares for around $1.7 billion.

Musk had asked him on Twitter last month about the size of the Kingdom's stake in Twitter and about the country’s views on “journalistic freedom of speech”.

The prince did not reply to the tweet, but said on Thursday that Musk was a “‘new’ friend” and “excellent leader”.

Saudi Arabia ranks number 166 out of 180 on the World Press Freedom Index and Qatar ranks number 119, according to the NGO Reporters Without Borders.

Meanwhile, a law in Qatar states that spreading “false or malicious” news can come with a five-year prison sentence.

How the investors will help Musk

According to the Financial Times citing people briefed on the matter, Musk had at first tried to attract large private investors but after several conversations with them, all the major players except Brookfield Asset Management left.

The newspaper reported the main problem “was the lack of clarity about Musk’s plan to overhaul” Twitter and “their inability to make a real impact” on Musk.

Musk originally rejected a seat on Twitter’s board in favour of taking it private, saying that would make it easier to improve the social media platform.

The extra support is much needed for Musk who in late April said he would fund his takeover of Twitter with $21 billion in cash and finance the remainder with $25.5 billion in debt.

The debt includes a $12.5 billion margin loan backed by his Tesla shares, meaning these could be seized by his lenders if he defaulted. The new commitments will allow Musk to halve the size of that margin loan to $6.25 billion.