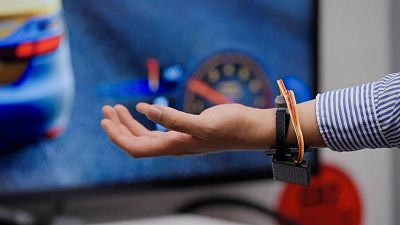 20-year-old Aaryan Shah has been in a wheelchair for his whole life. He was born with Cerebral Palsy (CP), the name for a group conditions that affect movement and co-ordination.

There are 17 million worldwide living with CP, according to the Cerebral Palsy Alliance, including 34,000 people currently living in Shah’s home country Australia.

The severity of the disorder varies from one sufferer to another.

Two thirds of people affected by CP find it difficult to move one or both arms and 50 per cent find speech difficult or impossible, according to data provided by the Cerebral Palsy Alliance.

In Shah's case, the physical impairment is severe. Only his right hand has useful mobility.

"My right hand basically does everything for me because it's not really as affected and it's not, my wrist isn't bent, it doesn't have as much spasticity and dystonia so I rely on it quite heavily," he said.

On top of this, Shah can only use one finger to type on a keyboard which, in his own words, is "slow and inefficient".

The efforts Shah has to make are also very tiring.

Using a computer can be challenging to some, so when they're limited by physical disabilities as well, it can make it incredibly difficult.

How a new bracelet may help

Two years ago, a team of engineers at the University of Sydney's School of Computer Science came up with an idea to change the life of Shah and people affected by other CP and motor neuron diseases.

The sensors pick up the tiniest of movements and vibrations made in the carpal tunnel, the part of the wrist that contains the tendons that control the hand.

When fingers are moved, the vibrations they create are transmitted via Bluetooth to a computer programme.

An individual's specific movement patterns are then instantaneously interpreted by machine learning.

"Everybody can do this: if you touch your carpal tunnel like that and move your fingers a little bit, you'll see tiny vibrations happening on your wrist and that's how our body moves our fingers,” Withana, a Senior Lecturer and Australian Research Council Discovery Early Career Researcher Award (ARC DECRA) Fellow at the university, explained.

According to Withana, the sensors detect the vibrations and artificial intelligence analyses the vibrations to figure out which finger is moving and by how much.

The whole idea is to make the device really simple to use for people with CP and motor neuron diseases.

"We want to create technology that actually tries to understand the abilities of people with disabilities rather than focusing on the disability and so that technology can actually intervene and be a helpful tool rather than another thing for people to learn," he explained.

Project is being trialled

Funded by the Cerebral Palsy Alliance and the Neurodisability Assist Trust, Lin and Whithana's work involved a lot of trials and tweaks especially when it came to finding the right computer programme to interpret and use the device's data.

The bracelet's springs can be personalised and become extremely sensitive to a particular user's needs.

The whole device itself bypasses the need to put lots of sensors on the fingers and hand by only using the subtle carpal tunnel movements. As a result, it is less complicated and cumbersome than other devices.

"So, me and Anusha came up with the idea of using a conical spring so that it's slanted from top to bottom and that means it's a lot more stable when you put it on the skin," said Lin.

And there's no need for users to wait for the device to be manufactured in a factory. They can do it all themselves from the comfort of their home using a simple 3D printer.

"The sensors have to be incredibly personalised and incredibly sensitive. So, to do this, we found that if you can use things like 3D-printing where we don't have to depend on a mass manufacturing facility to build the same piece of technology for everybody, we can precisely personalise the technology to fit the individual user's needs," said Withana.

"What we found with 3D printing is that we can create individualised sensors that are customised to that person so that the signal quality and the performance can be quite amplified"..

3D printing also allows one to pay attention to the external appearance of the bracelet, its aesthetics, to better fit the needs and the individual preferences of each user.

"We envision that in the future, every household will have a 3D printer like we have a normal printer, and this sort of technology will help people to provide tools that they can create functional things like sensors in a very affordable way," said Withana.

Impact for those with Cerebral Palsy

Having begun testing the sensor bracelet, Shah hopes it will deliver on all its promises.

"Having something so portable that can do all this stuff is really cool and I'm excited to see the possibilities with it," he said.

When it's well calibrated, the device accurately interprets the user's intentions and can, for example, control a computer.

"I just hope it can make me a bit more functional with my left hand. I guess, especially from a computer's perspective like studying and using it all day," added Shah.

The bracelet Shah tested is actually fine-tuned to another user who's been testing it for a while. But it's so efficient that it still managed to interpret Shah's intentions when playing a basic video game that requires cutting virtual fruit in pieces.

"I think it's pretty cool how you can even do this basic thing with, like, just moving your arm up and down. It's a lot less movement that you need to use it than I first thought so that's really promising," said Shah.

During the trial, Withana is impressed by both Shah and the bracelet.

"You're really fast, I can tell you, and it's the very first time you even wore this," he said.

Right now, the bracelet is being tested in Sri Lanka and Australia.

Ultimately, Lin and Withana want the bracelet to work with a free phone application rather than a computer to make it even more user friendly.

"We want to improve the current device to a more usable and more rugged product. It is a very early prototype at the moment. It's functional but we want to make sure it's usable,” said Withana.

“We want to make some studies with people with Cerebral Palsy and possibly with other motor neuron diseases and we want to prepare a pipeline that we can actually give them away,” he added.

“And all the technology that we are talking about here is open source in a sense. We don't have any proprietary technology".

Can tiny robots sent into our brains help fight tumours?

This Egyptian researcher has built a brainwave-controlled wheelchair