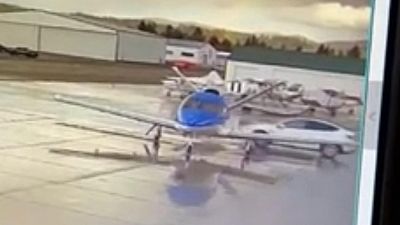 The Tesla Model Y appeared to hit the rear of the Cirus private jet, spinning it round   -   Copyright  Reddit/smiteme via Canva
By Tom Bateman  •  Updated: 25/04/2022

A Tesla Model Y with nobody at the wheel bumped into a private jet worth around $2 million (€1.8 million) after its owner summoned it using an automated parking feature.

A video posted on Reddit on Friday showed the electric car steadily approach the 9.4 metre-long Cirrus Vision jet, make contact with the tail and spin it around.

It's probably not what Tesla CEO Elon Musk had in mind when he called the electric car maker's "Smart Summon" feature its "most viral ever".

The video was posted by an attendee of a Cirrus event being held at Felts Field airport in Washington, USA.

"I also drive a Tesla Model Y - but was not the poor soul (with poor decision-making abilities) who summoned his Tesla around several expensive aircraft - only to crash it into the most expensive one ($3,500,000)!" Reddit user smiteme wrote.

Euronews Next was unable to confirm the list price of the jet the Tesla hit, but reports suggest that the basic version of the Cirrus Vision starts at around $2 million (€1.8 million).

The "Smart Summon" feature thought to be responsible for the crash allows Tesla EVs to drive themselves to a nearby location, using the owner's mobile GPS position to navigate.

How does Smart Summon work?

The user manual for the Model Y - a 5-seater SUV with a starting price of €62,990 - emphasises that owners should only summon their cars in "familiar and predictable" areas.

"Smart Summon is designed and intended for use only on parking lots and driveways located on private property," the company warns.

Another Reddit user who claimed to have witnessed the incident first-hand said the Tesla's owner was inside a nearby hangar at the time, apparently going against the company's advice on using the summoning feature safely.

"You must maintain a clear line of sight between you and Model Y and closely monitor the vehicle and its surroundings at all times," the Model Y user manual states.

Tesla introduced Smart Summon in 2019, with Elon Musk hailing it as "probably our most viral feature ever" on Twitter.

But video and photos posted online show that the feature can sometimes struggle to navigate obstacles safely.

In September 2019, a Tesla driver in Texas posted a video of his car narrowly avoiding a crash in a car park.

"So, Elon Musk, my first test of Smart Summon didn't go so well," they wrote.