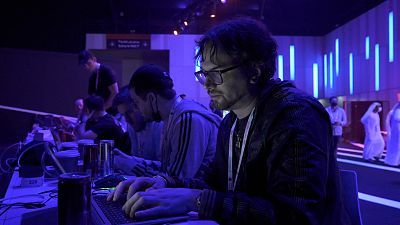 Hacking is big business online. There are two big reasons why people get hacked: Flaws in software and flaws in human behaviour. You cannot do much about coding vulnerabilities, but you can change your own behaviour and bad habits.

“Computers are just like guns back in the olden days,” says hacker Jayson E Street. “Criminals used guns because it was easy to commit a crime. Well, computers have made it really easy to commit crimes.”

Euronews spoke to a set of experts to see how hackers are operating and what you can do to combat them.

Here are the steps you can take to protect yourself online:

Who are the hackers?

Not all hackers are bad. There are Black Hat hackers – the cybercriminals – and so-called White Hat hackers working within the ethical and corporate space. Grey Hat hackers operate within both realms. White Hat hackers can be used by companies and individuals to help identify and resolve security risks.

Crime and intelligence analyst Mark T Hofmann says most hackers operate anonymously making their numbers hard to track, but he believes that 90 per cent of hackers are male, around 80 per cent are under 30, and 60 per cent started hacking at an early age, between 10 and 15 years old.

"Most of them are well-educated and have above-average intelligence. They do not necessarily need the money," says Hofmann. For these hackers, their motivation is beating the system.

Hofmann says: "[They] could just work for Google or any Silicon Valley company if they have good skills, so why do they commit crimes? Most crimes are about money, but where there’s also trade involved, we see thrill-seeking behaviour."

Whether motivated by money or thrills, data shows that cybercrime is on the rise. In 2020, the FBI collected information on for 791,790 suspected Internet crimes, an increase of more than 300,000 compared to 2019, according to a report released in March.

Whenever you are on the internet, you are at risk of being attacked, warns Bryan Seely, an ethical hacker and Strategic Advisor at Spire Solutions based in the UAE.

“If you are on the internet, everyone on the internet can see you. That's the nature of the way IP addresses work. So, if you're plugged in, you're getting scanned,” he says. “When you go onto the internet, get what you went for. Go home. Don't be distracted. Everything that is designed to distract you is not for you. It's for them. And that way they win.”

What are some common hacks to be aware of?

The FBI report showed that phishing and non-payment/non-delivery scams were the most common cybercrimes.

Basic phishing is an attempt to steal a person’s identity and money through emails that request personal information while pretending the request is from a trusted source. "Bait and switch" is another common tactic used by cybercriminals to steal personal data and login credentials through avenues masquerading as platforms like trusted websites.

For example, vendors using legitimate websites to sell second-hand goods are being targeted by criminals posing as buyers. They ask to pay for and collect the item by courier. The seller is then given a link to a fake courier web page where they must share their bank details to receive payment. Rather than paying, cybercriminals capture the bank and address data to steal funds from the account.

"Humans are clearly cybersecurity’s weakest link," says Hofmann. "Every person can be hacked. Sometimes it's not a matter of education. It's sometimes a matter of awareness or attention in the moment."

How to dodge cybercriminals & hackers during the COVID-19 pandemic?