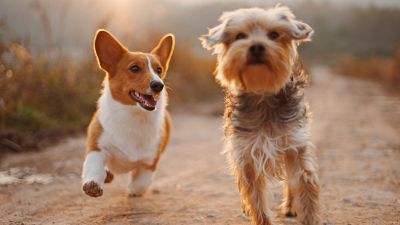 Is it time for dogs to go vegan? There is a growing movement promoting vegan dog diets, with Formula 1 legend Lewis Hamilton the most prominent proponent.

Now in what the authors believe is the first large-scale study comparing vegan with meaty dog diets, the results suggest a nutritionally sound vegan diet could bring health benefits and fewer hazards for man’s best friend.

The survey study of the guardians of 2,536 dogs looked at links between dog diets and health outcomes.

The dogs were fed either a conventional meat diet, a raw meat diet, or a vegan diet. The survey included questions about the dogs’ health, including how many times they visited the vet, what medication they were on, and specific dog health issues.

Andrew Knight, professor of animal welfare and ethics at the University of Winchester in the UK and the lead author of the study, said its findings were clear.

“We found the diet that was healthiest and least hazardous for the dogs was a nutritionally sound vegan diet,” he told Euronews Next.

The outcomes were slightly better for dogs on raw meat diets over vegan diets, although the authors argue these are not statistically significant and that other factors such as the age of the dogs need to be factored into future studies to get a clearer picture.

Knight points out, meanwhile, that there is a growing body of evidence regarding the hazards of a raw meat diet - hazards that are not linked to vegan diets.

“There’s a considerable body of study showing they are associated with bacterial and parasitic pathogens and protozoa [Editors’ note: single-celled organisms], which are more prevalent in the dogs and also the people in the same household, so they’re getting them either from the dog or the food they’re preparing,” he said.

A paper presented to the European Congress of Clinical Microbiology & Infectious Diseases last year warned that "the trend for feeding dogs raw food may be fuelling the spread of antibiotic-resistant bacteria."

The study revealed that Enterococci, a genus of bacteria commonly found in human intestines, was present in more than half of the analysed samples.

This type of bacteria is often intrinsically resistant to antibiotics, meaning some species of Enterococci can lead to dangerous disease outbreaks.

The paper's authors cautioned that with an estimated 90 million pet dogs in Europe, and nearly 500 million worldwide, dog food may be a dangerously overlooked source of antibiotic resistance globally.

The study did suggest slightly better health outcomes for dogs on raw meat diets, but Knight cautioned that settling this required further studies.

“What we are clear on is that raw meat diets are associated with significant dietary hazards, particularly the pathogens,” he said.

Knight said he was hearing from more and more people wanting to launch vegan pet food start-ups, as the boom in plant-based foods for humans spills over to our pets.

“One of the main concerns people have had is whether their cats and dogs can be healthy on these diets,” he said, adding that interest in the diets would increase further when more results of studies come out.

Those concerns are echoed by the British Veterinary Association, which does not currently recommend feeding dogs a vegan diet.

“There is a lot of ongoing research and scientific interest in the field of vegan dog diets and this paper adds to the body of evidence supporting its benefits,” said BVA President Justine Shotton.

“However, there is currently a lack of robust data mapping the health consequences of feeding a vegan diet to a large number of dogs over many years, so we look forward to seeing further research on whether non-animal protein sources can meet a dog’s dietary requirements over the long term,” she added.

She warned that owners who want to feed their pets a vegan diet should “take expert veterinary advice to avoid dietary deficiencies and associated disease”, and that “it is much easier to get the balance of nutrients wrong than to get it right”.

The research by Knight and his colleagues was funded by the charity ProVeg International and its findings were presented in the peer-reviewed, open-access journal PLOS ONE.