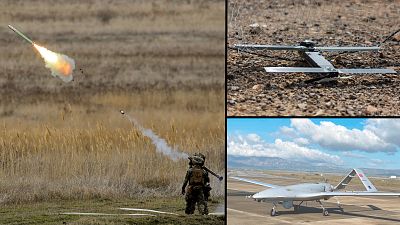 Ukraine has cutting edge weaponry at its disposal in its fight against Russia's invasion   -   Copyright  AP Photo
By Luke Hurst  with Reuters, AP  •  Updated: 11/04/2022

Ukraine has some cutting-edge military hardware at its disposal in its fight against Russia’s invading forces.

That’s largely thanks to deliveries of weaponry from allies looking to help the country bolster its defence.

From anti-aircraft MANPADS, to anti-tank missiles, to a drone so beloved by Ukrainian forces they are singing about it, countries are continuing to send critical equipment to the war-torn country.

The fastest short-range surface-to-air missile in the world, Thales’s man-portable air-defence system (MANPADS) was thought to have been captured on video being used to shoot down a Russian helicopter in the Luhansk region in March.

The UK sent the weapon system to Ukraine following Russia’s invasion, with the government insisting it fell within the definition of defensive weapons.

A different type of MANPADS, these US-made anti-aircraft weapons have been in service since the 1980s.

The United States has included Stingers in its weapons shipments to Ukraine, and while the missiles are slightly slower and have a shorter range than the Starstreak, they have proved highly effective against invading forces.

NATO members have also been equipping Ukraine with Javelin anti-tank missiles, a weapon that has proved so useful it has become a symbol of the resistance against Russia.

An image of Mary Magdalene reimagined holding a Javelin missile has become a meme and a symbol of hope and defiance.

The US administration confirmed last week that it is sending “kamikaze” Swithblade drones to Ukraine.

A single-use drone that explodes on impact, the Switchblade comes in two formats, one of which is small enough to fit into a backpack, with the whole kit - the payload, launcher, and transport bag - weighing in at just 2.5 kg.

A drone that has been so effective Ukrainian troops have been singing about it.

The Turkish-made drones were sold to Ukraine - reportedly by a private company rather than the state - but a Turkish bureaucrat has nonetheless claimed that Russia complained to Turkey about the deal.

The Bayraktar TB2 carries lightweight, laser-guided bombs, and they normally excel in low-tech conflicts, having been previously sold to more than a dozen countries, including Azerbaijan, Libya, Morocco and Ethiopia.

The drones carried out unexpectedly successful attacks in the early stages of Ukraine’s conflict with Moscow, and have also been key on social media, with their aerial videos of destroyed Russian convoys becoming a key tool in Ukraine’s information war.

Aaron Stein, director of research at the US-based Foreign Policy Research Institute, told AP: “I’d call it the Toyota Corolla of drones (…) It doesn’t do everything that your high-end sports car does, but it does 80 per cent of that, right?”

What is Ukraine not getting from its allies?

Ukrainian president Volodymyr Zelenskyy has repeatedly called on the US and other western allies to provide his country with the tools he says it needs to survive.

Along with the anti-aircraft and anti-tank missiles that have been delivered, he has demanded aircraft and tanks - which countries have not been quick to deliver as they balance the need to support Ukraine and not spark a wider war with Russia.

"You have thousands of fighter jets! But we haven't been given one yet. We appealed for tanks so that we could unblock our cities that are now dying," Zelenskyy said on March 24.

"You have at least 20,000 tanks! Ukraine asked for a percentage, one percent of all of your tanks! Give or sell to us. But we do not have a clear answer yet,” he added.

The US has since promised to get Ukraine “the weapons it needs” to defend itself against Russia.

US national security adviser Jake Sullivan said on Sunday (April 10) that the Biden administration will send more weapons to Ukraine to prevent Russia from seizing more territory and targeting civilians.

The White House says it has sent $1.7 billion in military assistance to Ukraine since Russia launched its invasion on February 24.