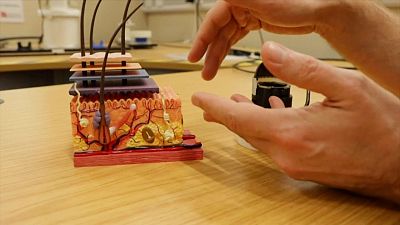 Scientists in the UK have developed a 3D-printed fingertip that can touch and feel surfaces almost like humans do.

Researchers at the University of Bristol say the technology could make robots considerably more agile and even help improve prosthetics.

“Being able to 3D print tactile skin could create robots that are more dexterous or significantly improve the performance of prosthetic hands by giving them an in-built sense of touch,” said Nathan Lepora, professor of robotics and artificial intelligence (AI) at the University of Bristol.

Lepora and his colleagues developed the artificial fingertip using a 3D-printed mesh of pin-like papillae that mimics the movement observed between the inner and outer layers of human skin.

The team said the sense of touch of the robotic fingertip was "startlingly" close to that of real skin.

Back in the 1980s, scientists tracked how we register touch by counting the number of neurons that were fired when people made contact with different textured surfaces.

Lepora’s team said the robotic fingertip works in a similar way, and that it can produce artificial nerve signals similar to recordings from real tactile neurons.

Nathan Lepora
Professor of robotics and AI, University of Bristol

“For me, the most exciting moment was when we looked at our artificial nerve recordings from the 3D-printed fingertip and they looked like the real recordings from over 40 years ago,” Lepora said.

“Those recordings are very complex with hills and dips over edges and ridges, and we saw the same pattern in our artificial tactile data”.

The findings were published in the Journal of the Royal Society Interface.

How accurate is the artificial fingertip?

While the team found a "remarkably close match" between the artificial fingertip and human nerve signals, it was not as sensitive to fine detail.

"The robot sense is just a bit more blurred than the human sense," Lepora said.

He suspects that’s because the artificial skin is thicker than human skin, and his team is now exploring how to 3D-print structures on the same microscopic scale.

Earlier this year, scientists from the Max Planck Institute in Germany revealed details of their own development of an artificial fingertip named Insight.

Both technologies use cameras, but the German system works in a different way.

“What we do is we shine different coloured lights onto that surface and then we can, in a very fine detail, see how everything moves by the change of the lighting,” said Georg Martius, director of intelligent systems at the Max Planck Institute.

Both the sensors and the cameras then convert the information into signals that feed into AI systems to recreate a robotic version of touch.

"We can actually measure forces from very light touch, like 20g up to like 200g in very fine resolution, so that's actually surprisingly accurate,” Martius said.

The advance in touch technology - known as haptic or 3D technology - still has a long way to go before it could be used in prosthetics.

Martius, who is also working on developing artificial skin, said there are many ways in which machines can't replicate the sensitivity of the human fingertip.

"These sensors measure forces, and sheer forces. That's something that they can do very well,” he said.

“But our skin can also, for instance, sense vibrations and temperature,” which these methods can’t achieve yet, he explained.

For now, the teams in the UK and Germany hope their technology will improve productivity in industrial settings.

"The focus in my lab is more on the integration of these fingertips into robot hands, to give the robot hands autonomy and dexterity using artificial intelligence, so that you can use those robot hands to do the tasks that we would do with our hands," said Lepora.