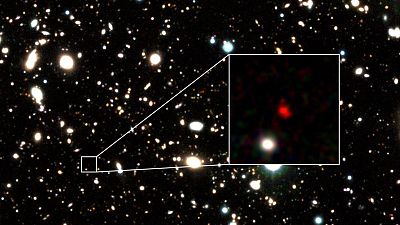 The distant early galaxy HD1, object in red, is shown at the center of this undated zoom-in handout image.   -   Copyright  Courtesy: Harikane et al.
By Euronews  with Reuters  •  Updated: 08/04/2022

Astronomers have discovered what may be the oldest and most distant galaxy ever observed.

The galaxy, called HD1, dates from a bit more than 300 million years after the Big Bang that marked the origin of the universe some 13.8 billion years ago, researchers said on Thursday.

The observations suggest HD1 formed stars at a staggering rate - perhaps about 100 new stars annually - or instead harboured what would be the earliest-known supermassive black hole, they said.

Because of how long light takes to travel immense distances - 5.9 trillion miles (9.5 trillion km) in a year - observing objects such as HD1 amounts to peering back in time.

If the data is confirmed by future observations, HD1 would supplant one called GN-z11 as the earliest-known galaxy by about 100 million years, and would be considered the earliest and most distant astronomical entity.

The researchers used data from telescopes in Hawaii and Chile and the orbiting Spitzer Space Telescope. They hope to obtain more clarity using the James Webb Space Telescope, due to become operational within months after being launched by NASA in December.

"Observational information on HD1 is limited and other physical properties remain a mystery including its shape, total mass and metallicity," said University of Tokyo astrophysicist Yuichi Harikane, lead author of research detailing the discovery published in the Astrophysical Journal.

Metallicity refers to the proportion of material other than the gases hydrogen and helium that were present in the primordial universe.

"The difficulty is that this is almost the limit of the capabilities of current telescopes in terms of both sensitivity and wavelength," Harikane added.

What is a galaxy?

Galaxies are vast assemblages of stars and interstellar matter bound by gravitational attraction, like the Milky Way in which our solar system resides. The first galaxies, arising 100 million to 150 million years after the Big Bang, were less massive and denser than those existing today, with many fewer stars.

The researchers said HD1, with a mass perhaps 10 billion times greater than our sun, may have been populated with the very first generation of stars. These so-called Population III stars are hypothesised as extremely massive, luminous, hot and short-lived, composed almost exclusively of hydrogen and helium.

"After the Big Bang, some regions in space ended up being denser than others, and this attracted progressively more matter. This effect created large concentrations of gas, some of which collapsed to form stars," said astrophysicist Fabio Pacucci of the Center for Astrophysics-Harvard & Smithsonian, lead author of a related study in the journal Monthly Notices of the Royal Astronomical Society Letters.

Elements heavier than hydrogen and helium were absent in the universe's initial stages, forged later inside the earliest stars and then spewed into interstellar space when they exploded at the ends of their life cycles.

An alternative explanation for the UV luminosity could be a supermassive black hole about 100 million times more massive than our sun situated inside HD1, Pacucci added.

Many galaxies including the Milky Way hold supermassive black holes at their centres. Until now, the earliest-known one of these was dated to about 700 million years after the Big Bang.

The earliest stars and galaxies paved the way for those existing today.

"The first galaxies ... were a millionth of the mass of the Milky Way and much denser. One way to think of them is as the building blocks in the construction project of present-day galaxies, like our own Milky Way," Harvard University theoretical physicist and study co-author Avi Loeb said.