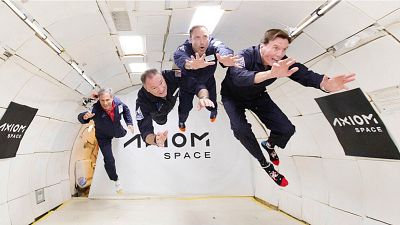 A SpaceX rocket ship blasted off on Friday carrying the first all-private astronaut team ever launched to the International Space Station (ISS), a flight hailed by industry executives and NASA as a milestone in the commercialisation of spaceflight.

Live video webcast by Axiom showed the 25-story-tall SpaceX launch vehicle - consisting of a two-stage Falcon 9 rocket topped by its Crew Dragon capsule - streaking into the blue skies over Florida's Atlantic coast atop a fiery, yellowish tail of exhaust.

SpaceX, the rocket company founded in 2002 by billionaire Elon Musk, directed mission control for the flight from its headquarters near Los Angeles.

NASA, besides furnishing the launch site, will assume responsibility for the astronauts once they rendezvous with the space station to undertake eight days of science and biomedical research while in orbit.

The mission, representing a partnership among Axiom, SpaceX and NASA, has been touted by all three as a major step in the expansion of commercial space ventures collectively referred to by insiders as the low-Earth orbit economy, or "LEO economy" for short.

"We're taking commercial business off the face of the Earth and putting it up in space," NASA chief Bill Nelson said before the flight, adding the shift enables his agency to focus more on sending humans back to the moon, to Mars and on other deep space exploration.

While the space station has hosted civilian visitors from time to time, the Ax-1 mission will mark the first all-commercial team of astronauts to use ISS for its intended purpose as an orbiting research laboratory.

They will be carrying equipment and supplies for about two dozen science and technology experiments to be conducted before they are slated to leave orbit and return to Earth 10 days after launch.

These include research on brain health, cardiac stem cells, cancer and ageing as well as a technology demonstration to produce optics using the surface tension of fluids in microgravity, company executives said.

Lopez-Alegria, 63, is the Spanish-born mission commander and Axiom's vice president of business development. He is set to be joined by Larry Connor, a real estate and technology entrepreneur and aerobatics aviator from Ohio designated as the mission pilot. Connor is in his 70s but the company did not provide his precise age.

Rounding out the Ax-1 team are investor-philanthropist and former Israeli fighter pilot Eytan Stibbe, 64, and Canadian businessman and philanthropist Mark Pathy, 52, both serving as mission specialists.

The Ax-1 crew may appear to have a lot in common with many of the wealthy passengers taking suborbital rides lately aboard the Blue Origin and Virgin Galactic services offered by billionaires Jeff Bezos and Richard Branson, respectively.

But Axiom executives said their mission is more substantive.

"It is the beginning of many beginnings for commercialising low-Earth orbit," Axiom's co-founder and executive chairman, Kam Ghaffarian, told Reuters in an interview.

"We're like in the early days of the internet, and we haven't even imagined all the possibilities, all the capabilities, that we're going to be providing in space."

Launched to orbit in 1998, the ISS has been continuously occupied since 2000 under a US-Russian-led partnership including Canada, Japan and 11 European countries.

Astronomers spot the most distant galaxy on record