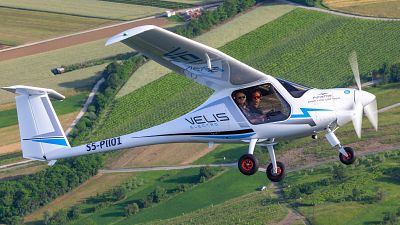 Image shows Pipistrel’s Velis Electro plane which Swedish aspiring pilots will use in the course of their flight training.   -   Copyright  Business Wire
By AP  •  Updated: 06/04/2022

In a hangar at Skellefteå Airport in northern Sweden, an aircraft is getting charged, ready for flight.

The small, two-seater Pipistrel electric airplane is the first of its kind to be certified for basic flight training.

Two battery packs - one in the nose, the other behind the cabin - give it a range of about 50 minutes. It's charged in about 30 minutes using renewable energy from the local provider.

"We also think that the airlines are very interested in this green technology because of the flying industry's need to do something about the environment too, and this is maybe a first step”.

The new pilot school, based in the northern city of Skellefteå about 200 kilometres south of the Arctic Circle, is set to begin classes this May.

Students will be working towards an Airline Traffic Pilot License - or ATPL - which will allow them to fly private and commercial aircraft. The programme takes about 20 months to complete.

For everything that can't be taught flying an electric aircraft, there's a four-seater Piper plane which runs on less polluting biofuel.

"To do a full ATPL education, you need to train with different types of planes too, and that will be ordinary airplanes. As soon as there will be electrical ones, we will change our fleet to these kinds of airplanes," says Hultdin.

"We think that even though you can't do everything, you can always do a little and this is a start," he added.

Back at the school's classroom, student pilots will also learn on this 200-degree flight simulator.

Instructors say student pilots clock up some 200 hours of flight time during their training which means using more sustainable aircraft could lessen the environmental impact.

"You still need to do those hours to be proficient and become a safe pilot before you can operate in an airline. So, of course, if you can do that in a carbon neutral way, I mean, that's amazing," says the school’s head of training, Johan Norberg.

The new pilot school is one of several green-themed initiatives in and around Skellefteå, in part driven by the arrival of battery startup Northvolt and its new gigafactory outside the city.

Aside from the traditional commercial aircraft that still roar along its runway, the city's airport is lessening its environmental impact by using fossil-free heating and electricity, as well as an electric vehicle fleet that transports passengers to the city centre.

"We are using certified green electricity from Skellefteå Kraft, we are heating the airport by bio pellets, and we drive our vehicles by fossil-free fuel or electricity," explained the airport's CEO Robert Lindberg.

Airlines argue that flying accounts for just 2.5 per cent of manmade greenhouse gas emissions and increasingly efficient planes now use about the same amount of fuel per passenger as a half-full car.

Yet the ease and falling cost of air travel is enabling more people to fly more often, so airline emissions are soaring even as other sources decline.

Experts say that without huge strides in efficiency, aviation will fall short of contributing its share toward meeting the Paris accord’s goals for reducing emissions and curbing climate change.

We are already seeing bigger and bigger airplanes, a lot of development projects around the world. So, perhaps this autumn there will be even a bigger plane that is approved. And then in two or three years, there may be players that can carry up to 30, 40 passengers. And in 10 years, perhaps the full size.

"What we have to look at now is pilot training for these planes. We have to also look at other parts, the MRO, the maintenance and repair organisations have to also prepare. And we also have to have the regulations, the legislation and the budget for doing this," said Fredrik Kampfe, Director of Industry Affairs at the Swedish Aviation Industry Group.

Not everyone is convinced. In Europe and North America, there's a small but growing movement shunning air travel because of its greenhouse gas emissions.

The trend is most prominent in Sweden, where the likes of teen climate activist Greta Thunberg have challenged travellers to confront the huge carbon cost of flying.

Teacher Miriam Rutschman is a member of campaign group We Stay on the Ground.

She says while the school's pilots might train on electric aircraft, there's still no viable larger commercial battery-powered models on the horizon.

One big challenge is the weight of battery systems needed to lift the machines off the ground.

"There are no large jumbo jets that are electrical, and it's not like they're going to come any time soon either," said Rutschman.

"We are already seeing bigger and bigger airplanes, a lot of development projects around the world," he said.

"So, perhaps this autumn there will be even a bigger plane that is approved. And then in two or three years, there may be players that can carry up to 30, 40 passengers. And in 10 years, perhaps the full size”.

It's the hope of the flight school’s instructors that electric aviation might soon take off.

EU lawmakers back ban on new combustion engine cars from 2035