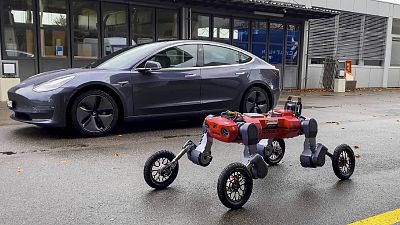 A Swiss company’s new versatile four-legged robot on wheels is capable of standing up and navigating more difficult terrains, including stairs.

It can also perform basic human-like tasks such as pressing buttons or operating a lever.

Dr. Marko Bjelonic, a roboticist at ETH Zurich, started working on the quadruped robot for his Ph.D. six years ago.

While the project started “out of fun”, he soon realised the myriad potential applications for a robot like this.

“We have seen how actually robust and stable the robot is on two legs. We then saw all the potential of this kind of platform,” Dr. Bjelonic told Reuters.

Swiss-Mile, a spin-off company from ETH Zurich, developed the robot which now has three different classifications: a car, a quadruped, and a humanoid robot.

In two-legged mode, the robot can serve different purposes from data-mapping in buildings, to helping rescue services and delivering packages.

The robot, which can reach a height of 1.8 m when standing in humanoid mode, distinguishes itself from other robots by being able to get a point of view similar to that of a human.

Dr. Bjelonic hopes that in the next five years the robot will be able to carry up to 100 kg and be widely used by rescue teams in dangerous environments.

The creation was presented by technology company Nvidia during their keynote speech at an Artificial Intelligence conference on March 22.