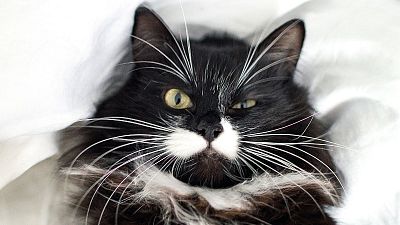 Cat lovers with allergies may someday enjoy a genetically modified pet that does not give them itchy eyes.

Scientists in the United States say they’ve found an effective way to block the most common source of cat allergies using the genome editing technology CRISPR.

They hope the findings, published on Monday in The CRISPR Journal, could pave the way to a hypoallergenic cat through a treatment that knocks out the problematic gene.

Up to 15 per cent of people suffer allergic symptoms such as sneezing and itchy eyes when they come into close contact with cats.

Current treatments have limited impact, so researchers at the biotech company InBio (previously Indoor Biotechnologies) in Virginia have been working on their own approach.

They targeted a protein found in felines called Fel d 1, which is found in cats’ skin and saliva - and, by extension, on their fur - and is believed to be the main culprit when it comes to cat allergies in humans.

The scientists used CRISPR, the Nobel Prize-winning gene editing technology that works like a pair of molecular scissors, to prevent samples of cat cells from producing the protein.

They say they’ve collected in vitro evidence that this can be done effectively and safely.

It’s not the first time research focuses on this protein to reduce cat allergens. In 2020, pet food company Purina released a line of cat food treated with an egg-based ingredient said to inhibit Fel d 1 in their saliva.

Researchers have also been working on a vaccine for cats that reduces levels of the allergen.

Analysing the DNA of 50 domestic cats and 24 exotic cats such as leopards and lions, the scientists at InBio found regions along two genes primarily involved in producing Fel d 1 that would be suitable for editing with CRISPR.

They found a lot of variation across species in the expression of the targeted genes, suggesting “that the allergen may be nonessential for cats”.

“Our data indicate that Fel d 1 is both a rational and viable candidate for gene deletion, which may profoundly benefit cat allergy sufferers by removing the major allergen at the source,” the authors wrote.

However, they say further studies are needed before moving on from in vitro experiments on cells and trying actual CRISPR knockouts in cats.

Quitting smoking could give you five more years of healthy life