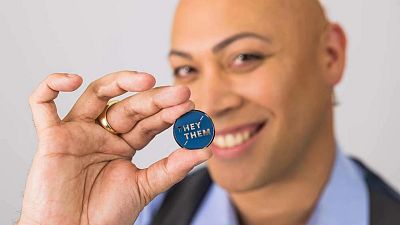 An American airline has updated its uniform guidelines to permit staff to wear makeup and nail polish, regardless of their gender identity.

On Monday, Seattle-based Alaska Airlines announced it would also relax rules on footwear, body piercings, tattoos and hairstyles for staff working as flight attendants, in airport lounges and in customer service roles.

New gender-neutral uniforms and pin badges stating an employee's preferred pronouns are also on the way, the airline said.

"I know firsthand what it feels like not to be seen, heard or able to bring your authentic self to work," said James Thomas, Alaska Airlines' director of diversity, equity and inclusion.

"When I’ve experienced this, it didn’t feel great and honestly made it hard to come to work every day during those times, or to deliver my best work," Thomas said.

The airline's new policies, which it said provide staff "more freedom and flexibility in individual and gender expression," came about after the American Civil Liberties Union (ACLU) filed a legal complaint over its uniform standards in May 2021.

It argued that dividing uniform standards into fixed "male" and "female" categories was a breach of Washington State equality law,which prohibits discrimination on the basis of sex.

The complaint came after Alaska Airlines flight attendant Justin Wetherell, who identifies as non-binary, turned to the ACLU, alleging the airline's gender stereotypical uniform standards led to them being misgendered at work and "exacerbated their anxiety, insomnia, and depression".

While Alaska's uniform policy allowed for transgender employees to wear the uniform that conformed to their identity, the airline did not allow staff to mix and match from the set "male" and "female" standards, the ACLU said.

Announcing Monday's changes, Alaska Airlines said "this is an important step on a continued journey to be more inclusive, and there’s more work ahead. We will continue to look at our policies, programs and practices to ensure we live our values and create a place where everyone feels they belong".

Isaac, a Washington DC-based customer service agent who goes by all pronouns, said the changes showed the airline was becoming a more accepting and diverse workplace.

"I accept he/him/his, she/her/hers, and they/them/theirs. I feel that there has been greater awareness and sensitivity to personal pronouns, and I love that. But I’m also cognisant that changes take time and I want our society to feel comfortable with how they view and communicate with me".

The traditionally conservative airline industry has seen growing calls for changes to the rigid requirements for staff in recent years.

In 2019, UK airline Virgin Atlantic announced that its female flight attendants would no longer be obliged to wear makeup at work, and would also be allowed to wear trousers as standard.

In other areas, however, there remains a lot of work for the airline industry to do before it achieves equality among staff.

Figures from the United States Federal Aviation Administration (FAA) for 2021 showed that just 6 per cent of American pilots identified as female.

By contrast, 79 per cent of FAA-certified flight attendants were women, the statistics showed.