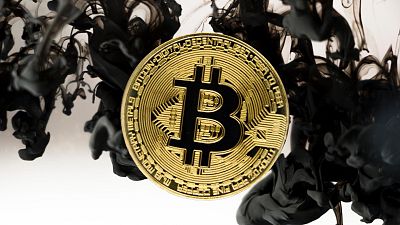 Elon Musk and Jack Dorsey are among the high-profile crypto enthusiasts targeted by the campaign   -   Copyright  Euronews Next / Canva
By Tom Bateman  •  Updated: 30/03/2022

Bitcoin's energy consumption could be vastly reduced by a single change to the cryptocurrency's programming, a new campaign backed by Greenpeace USA and the billionaire founder of the Ripple cryptocurrency, Chris Larsen, has claimed.

The Change the Code Not the Climate campaign says switching Bitcoin's mining method from proof of work (PoW) - where mining rigs compete in a winner-takes-all race to solve energy-hungry cryptographic puzzles - to the more energy efficient proof of stake (PoS) model would cut the cryptocurrency's electricity usage.

Bitcoin currently consumes more electricity in a year than Norway or Sweden do, according to figures from the Cambridge Bitcoin Electricity Consumption Index, while other coins including Cardano and Solana already use a PoS model.

"We know crypto doesn’t need much energy to work," the campaign said.

"Many newer cryptocurrencies are low consumers of energy or carbon-neutral because they use a better model: proof-of-stake".

If only 30 people — the key miners, exchanges, and core developers who build and contribute to Bitcoin’s code — agreed to reinvent proof-of-work mining or move to a low-energy protocol, Bitcoin would stop polluting the planet.

Change the Code Not the Climate
Environmental campaign

The campaign plans to launch a series of adverts putting pressure on well-known crypto boosters, including Tesla CEO Elon Musk and Twitter founder Jack Dorsey, who it says have a "responsibility to help clean up Bitcoin".

Ethereum, the world's second-biggest cryptocurrency network by market capitalisation, is expected to move to PoS later this year. The Ethereum Foundation, co-chaired by the network's founder Vitalik Buterin, has estimated that the switch will cut Ethereum's carbon footprint by over 99 per cent.

But the staking method has drawbacks of its own, with advocates of Bitcoin claiming PoW allows for a more decentralised - and therefore secure - network.

"They should understand how PoW and PoS really work, and realise that the energy use is necessary to provide an infrastructure that is secure, decentralised, and that generates real value," Martin Škorjanc, CEO of crypto mining and exchange firm NiceHash told Euronews Next.

Moving to a staking-based system also favours wealthier crypto holders, who can afford to stake more tokens and consequently have a higher chance of earning more in return, Škorjanc said.

"Their argument should not be to move Bitcoin to Proof of Stake, but instead to lobby for greener energy use," he added.

"Blindly demanding a switch to an untested protocol, is just a reflection of not understanding how value works within an economy. Pushing for green energy use however, would make Bitcoin mining much better, but Proof of Stake is definitely not the answer".

In its "manifesto" unveiled on Tuesday, the Change the Code campaign acknowledged that getting Bitcoin's stakeholders - such as mining companies - on board with a change to PoS would be a challenge.

"Changing Bitcoin would render a whole lot of expensive infrastructure worthless, meaning Bitcoin stakeholders will need to walk away from sunk costs — or find other creative solutions," it said.

EU targets crypto wallets in fresh round of sanctions against Russia