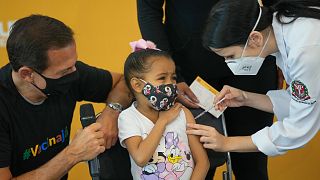 Moderna said on Wednesday it would seek emergency authorisation of its COVID-19 vaccine for children under the age of six, saying the jab generated a “robust” immune response in children as young as six months.

The Omicron variant was predominant during Moderna’s pediatric trial. The company said these figures were consistent with the lower effectiveness against Omicron seen in adults who had received two doses of its vaccine.

The company is now preparing to study the effectiveness of a booster shot in young children, including one that would target the original strain of the virus as well as Omicron.

What did the trials show?

Some 6,700 children aged between 6 months to under 6 years of age took part in a study carried out in the United States and Canada.

Interim results showed those younger children had a similar immune response to young adults when given a dose one-fourth as strong, the company said.

There were no severe cases in the pediatric trial for either vaccine or placebo participants.

Moderna said the shots, spaced four weeks apart, were generally well tolerated in the age group and the majority of side effects experienced were mild or moderate.

Moderna’s vaccine could be the first authorised shot for children under the age of 5 in the United States, where many parents of young children have been waiting on a vaccine.

A rival shot made by Pfizer-BioNTech is authorised for use in children 5 and older.

But their trial results for 2 to 4-year-olds showed a weaker immune response than in adults, forcing the trial to be extended to test a third dose. Results are expected in April.

Where are kids already getting the jab?

Moderna’s vaccine is approved by the FDA for use in adults 18 and older. But it has yet to be approved for 6 to 17-year-olds in the US despite gaining approval for that age group in Australia, Canada and the European Union.

The United Kingdom and Switzerland have allowed the vaccine to be used in 12-17-year-olds.

US regulators have asked the company for more safety data and the FDA also said it needed additional time to evaluate the risk of a type of heart inflammation called myocarditis after vaccination in the age group, a rare side effect that has primarily affected young males.

The dose size tested in Moderna’s pediatric trial was 25 micrograms – a quarter of the dose that adults receive for each of their first two shots.

There have been some concerns about that dosage. By comparison, the dosage of Pfizer-BioNTech’s vaccine – which uses similar mRNA technology – was 10 micrograms for 5 to 11-year-olds.

They are testing 3 microgram doses for children younger than 5.