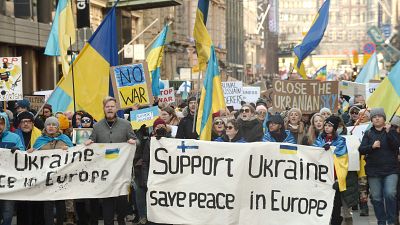 Helsinki has seen protests in support of Ukraine in the weeks since Russia's invasion began   -   Copyright  Mikko Stig/Lehtikuva via AP   -
By Tom Bateman  •  Updated: 23/03/2022

A university in Finland has been targeted by a "disinformation operation" that has seen automated bots post thousands of anti-Russian messages to its social media pages.

The messages, which began appearing on Monday, call on the University of Helsinki to effectively sanction its Russian students and staff, withdraw scholarships and even stop accepting students from Russia altogether.

The university, which is the largest in Finland, said on Wednesday that it suspected the messages were the result of an organised campaign.

"The comments are very similar, if not identical to each other," the university's social media lead Tomas Sjöblom told Euronews Next.

"They repeat a variety of circa 10-15 different messages word to word. This kind of movement doesn’t happen by itself, but we don’t have any concrete evidence as to who might be behind this campaign".

The posts don't leave many clues as to their origin. Most of them are written in English, Sjöblom said, with those appearing in Finland's official languages of Finnish and Swedish appearing to be machine translated.

A motive behind the messages has also been hard to pin down, Sjöblom added.

"It could very well be that the intent is what it looks like on the surface: to pressure the university to place sanctions on its own students or staff. Or it could be something less specific like influencing opinions about people of Russian descent at the university or in Finland," he speculated.

The bot accounts currently only appear to have targeted the University of Helsinki's accounts. Aalto University, located in the city of Espoo near the Finnish capital, told Euronews Next it had not detected any disinformation efforts.

"We do, however, take the possibility seriously; we monitor all discussions and take measures to ensure that the university’s channels are not used as a platform for disinformation campaigns of any kind," Aalto University's interim head of communications Katrina Jurva told Euronews Next via email.

Both universities have rolled back their involvement with institutions in Russia and Belarus since Russia's invasion of Ukraine began on February 24, following European Commission and Finnish government guidance to cease cooperation.

Russia's war in Ukraine has prompted intense debate about security in non-aligned Finland, which shares a 1,340km border and history of military conflict with its larger neighbour to the east.

This week, a survey by the Finnish Business and Policy Forum (EVA) found that 60 per cent of Finns would support the country joining NATO - the defensive military alliance set up during the Cold War.

That represents a 34 percentage point rise since the same question was polled a year ago.

"The exceptionally rapid, large and broad-based change in attitude is based on the understanding that a fundamental change has taken place in the Finnish military security environment and that the threat posed by Russia has increased," EVA said.

While attitudes towards Russia appear to be hardening in Finland, the University of Helsinki said it was working to delete all anti-Russian statements posted by the bots.

"We’re concerned about potential implications for the feeling of safety on campus of our Russian speaking students. I think that we have a responsibility towards them as well: to be careful that campaigns such as this don’t make them feel unsafe on campus," Sjöblom said.

"It’s not a very big leap of imagination to think that a campaign whose main messages are, for example, that most Russians support the invasion, would make it feel unsafe for students to speak Russian on campus or even go to campus, whatever they personally think about the invasion".

UK government needs to 'get a grip on Whatsapp', report says