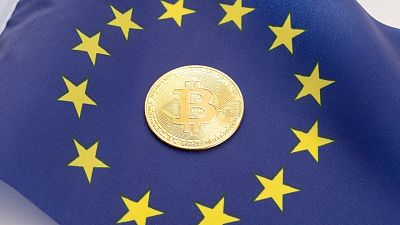 The European Union has rejected a proposed rule that could have banned the cryptocurrency Bitcoin across the bloc but set new draft rules to protect consumers and make mining more sustainable.

A last-minute addition to the bill was made over the weekend, which aimed to limit the use of cryptos that are powered by the energy-intensive process called proof-of-work (PoW). But it was voted down by the parliamentary committee on Monday.

Crypto-assets are neither issued nor guaranteed by a central bank or a public authority and are therefore currently out of the scope of EU legislation. The European Parliament argues this can cause "risks for consumer protection and financial stability" and could lead to market manipulation and financial crime.

There is also widespread concern over the sustainability of cryptocurrencies as the energy consumption of Bitcoin equals that of entire small countries, according to some studies.

What did the EU vote for?

MEPs voted for a uniform legal framework for crypto-assets in the European Union. This includes, measures for consumer protection and safeguards against market manipulation and financial crime.

To reduce the cryptos' carbon footprint, MEPs have asked the European Commission to include crypto-assets mining in the EU taxonomy (a classification system) for sustainable activities by 2025.

The draft rules had 31 votes in favour to 4 and 23 abstentions. Formal negotiations on the draft framwork will now proceed between the European commission, council and parliament.

"With the adoption of the MiCA report, the European Parliament has paved the way for an innovation-friendly crypto-regulation that can set standards worldwide," said MEP Stefan Berger of the European People's Party.

What is PoW and how bad is it for the environment?

Bitcoin and Ethereum use PoW, the mechanism used to confirm transactions and add new blocks to the chain.

All of the participants in the PoW blockchain network compete simultaneously to solve a cryptographic algorithm. The algorithm is designed to become more difficult to solve the more computers there are trying to solve it, which means a huge amount of computational power and therefore energy is expended validating each block in a blockchain.

Many countries such as China have banned crypto mining due to its massive energy consumption, as the country battled power cuts last year.

Despite the crackdown in China, which was the top destination for crypto miners, a recent study showed Bitcoin mining actually got much dirtier and emits around the same amount of CO2 annually as a country the size of Greece.

Several EU parliamentarians have been pushing to ban PoW cryptos in favour of more sustainable energy. However, they have also raised concerns that switching to renewable energy would mean such energy is favoured for crypto mining rather than for public use.

Another option could be to move to the Proof-of-Stake model, which is considered greener as it randomly allocates coins to users, who put up coins for collateral.

The draft proposal on limiting PoW received backlash from the cryptocurrency community.

“Individuals and organisations should be free to choose the technology most appropriate to their needs,” a statement from the crypto wallet provider Ledger read.

“Policymakers should neither impose nor discriminate in favour of a particular technology. This is deeply concerning and would have serious consequences for Europe”.