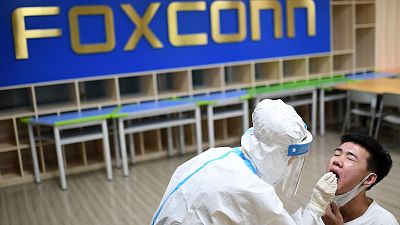 Apple suppliers Foxconn and Unimicron Technology Corp have suspended operations in the Chinese city of Shenzhen after the tech hub imposed strict measures to stem a COVID-19 outbreak.

Shenzhen, which borders Hong Kong and is known as China's Silicon Valley, is carrying out mass testing after dozens of new local cases were recorded. Officials have suspended public transport and urged people to work at home this week as much as possible.

Foxconn said its Shenzen operations would be suspended until further notice, adding it would deploy backup plants to reduce the disruption to production.

Two sources familiar with the matter told Reuters that Foxconn and its subsidiaries' operations in Shenzhen would be suspended for the first half of the week.

One of the people said the government was allowing companies to operate if they could create a "closed management" system where employees would live and work in a bubble, cut off from the wider public. Such a system was in place during the Beijing Winter Olympics.

Apple and Intel did not immediately respond to requests for comment.

China is battling its biggest COVID-19 outbreak since the start of the pandemic. Multiple provinces and cities have tightened restrictions in line with Beijing's "dynamic-clearance" ambition to suppress contagion as quickly as possible.

Officials have locked down Changchun city, the capital of northeastern Jilin province, and shut schools in the financial hub of Shanghai.

Other companies that have reported an impact to their operations by China's COVID-19 measures include electronic component manufacturer Sanyou Corp and Qingdao Guilin Environmental Technology.

Russian OnlyFans models are being hit by Ukraine war sanctions too