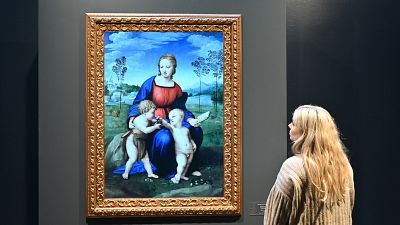 The nonfungible token (NFT) marketplace is booming with sales jumping by more than 200 times in 2021, according to a new report which also highlights how NFTs have become precisely that, a marketplace.

Sales of NFTs jumped 21,000 per cent to more than $17.6 billion (almost €16 billion) in 2021, up from $82 million (€74 million) a year earlier according to the report from NFT data company Nonfungible.com, developed in partnership with BNP Paribas-owned research firm L’Atelier.

NFTs are unique digital assets, which can be thought of as digital collectibles that include art, gaming, or other creative products that are recorded on a blockchain or digital ledger.

But the market has been criticised for being a bubble and the report shows it is exactly a buyers' market.

The number of buyers rose almost 2,962 per cent last year, while the number of sellers increased by 3,669 per cent.

The report also found NFTs were being kept 48 days on average in 2021 before being sold, compared with 156 days the year before.

The most valuable NFTs

Last year, a token representing a collage by the digital artist Beeple sold for a record $69 million (€62 million) at the auction house Christie’s.

The most popular category of NFTs was collectibles, which accounted for $8.4 billion (€7.6 billion) worth of sales.

NFT collections like Bored Ape Yacht Club, a collection of 10,000 digital collectibles on the Ethereum blockchain have also spiked in popularity, boasting a 7-day sales volume of $32.2 million (€28 million).

Gaming NFTs such as Axie Infinity was the second-largest category, making up $5.2 billion (€4.7 billion) in sales.

However, Dan Kelly, CEO and co-founder of NonFungible.com argues the NFT space was not a bubble.

“2021 was an incredible year. For many, the explosion that surrounded the Collectibles segment is considered a ‘bubble,’” he said.

“On the contrary, we believe that today, every community that was created in 2021 has a digital identity. It is essential that there are strong values carried by strong communities as we start to build a whole new Web3 industry”.

The future of NFTs

Web3, which some dub as the next phase of the Internet, is an umbrella term for an online ecosystem that cuts out the big middlemen on the Internet. It includes technology such as blockchain, which would be used in circumstances such as recording transactions.

The metaverse - 3D virtual worlds - would also make up Web3 and is seen as the future for NFTs.

According to Nonfungible.com’s research, sales of digital land and other projects in the space reached $514 million (€465 million) last year.

It comes after Facebook’s rebrand to Meta last October and brands such as Nike jumping on the metaverse bandwagon to make virtual clothing.

While last year was a breakthrough for NFTs in terms of volume and value of transactions, sales may not grow to such a large extent in 2022 but the underlying technology it uses could.

“In 2022, I expect that while the NFT market will continue to be volatile, the better projects will also start to mature technologically, socially and commercially,” said Nadya Ivanova, COO and & foresight lead at L’Atelier BNP Paribas.

“Beyond the focus on NFTs as popular collectibles, there is currently a real need and an opportunity to build infrastructure and utility services for this emerging market and asset class, such as financial and risk management products,” she added.

“The NFT market has barely pushed the boundaries of its underlying technology”.

What is Web3 and why is Jack Dorsey attacking it?