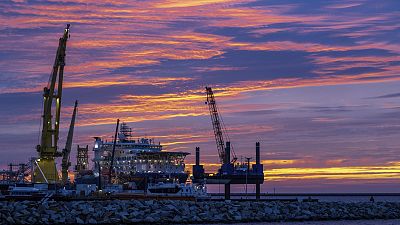 The Russian pipe-laying ship 'Akademik Tscherski' which is on deployment for the further construction of the Nord Stream 2 Baltic Sea pipeline.   -   Copyright  Jens Buettner/dpa via AP
The opinions expressed in this article are those of the author and do not represent in any way the editorial position of Euronews.
By Farid Karimi  •  Updated: 08/03/2022

Following Russia’s invasion of Ukraine, one could ask what went wrong and what will happen now concerning so-called "energy politics".

The hostility of Vladimir Putin towards Ukraine, and the EU in general, has been seemingly increasing since the completion of the Nord Stream 2 (NS 2) project while also seeing demand for the Russian energy resources in the EU increasing.

The NS 2 project connects Russia’s gas resources directly to the EU countries, mainly Germany. The pipeline is about 1,200 km long, arriving at the city of Greifswald in the northeast of Germany from Ust-Luga in northwestern Russia.

The total capacity of NS 2 is 55 billion cubic meters of gas per year. This controversial project has been criticised for various reasons, including the environmental impact of the pipeline, security threats from Russia to the post-Soviet states, and the accusation that it is not about energy only but rather corruption involved, implicating among others former German chancellor Gerhard Schröder.

One could only think why Germany has seemingly rewarded Russia with NS 2, importing more hydrocarbons contrary to Germany's ambitious goal and claims to reduce CO2 emission on the one hand while decommissioning its nuclear power plants on the other.

Reliance on energy imported from Russia has led to security and political risks, not least to the Baltic states and Ukraine. These risks cultivate distrust between countries and pose threats to democracies and cooperation between the EU states.

It is vital to develop multi-route energy corridors and multi-actor agreements that reflect a consensus among all EU members and their allies.

At this turbulent time, the EU needs to stay united in the face of various challenges, including the current invasion of Ukraine and the energy crises that have seen soared energy prices significantly.

The latter has ironically come right after the completion of NS 2, which promised to ensure sustainable gas supplies. It went ahead after the unexpected U-turn of the Biden administration in removing sanctions on the project for opaque reasons.

In the aftermath of the Russian invasion of Ukraine, the Biden administration is now going to reimpose sanctions on the project while Germany has threatened to halt the project completely. These could have been ex-ante measures to prevent a war in Europe.

It seems there is something amiss, not least in the miscalculations in the EU and the Biden administration’s approach to energy policy, whether it concerns Russia or Belarus and Iran, three countries that collaborate to threaten the energy security of Europe in one way or another.

For instance, Iran had helped Russia to circumvent NS 2 sanctions (in return, Russia has provided Iran with advanced satellites systems for military applications as well as supporting nuclear development of the Islamic Republic of Iran), and Belarus has threatened the EU to cut the Russian gas flow.

Russia and the allies seem to confidently rely on the West’s no-serious-reaction policy when confronted with these challenges.

The question is, can we still do something this late?

For the EU, particularly the Baltic states and Finland with their significant energy dependency and geopolitical security vulnerability, it is very important to minimise reliance on Russian resources through the following measures:

In sum, once the NS 2 project is in full operation, Germany will mostly rely on a single external supply route to meet its natural gas demand.

In this sense, the project appears to run counter to the spirit of EU policy goals, which call for reduced energy dependency and greater political security.

It is, therefore, vital to develop multi-route energy corridors and multi-actor agreements that reflect a consensus among all EU members and their allies and advance shared political and economic interests.

Such measures would create alternatives to ensure energy security if an external energy provider cuts the supply due to socio-political or economic conditions or a dispute, such as the current war in Ukraine.

The NS2 project and the over-reliance of Europe on Russian energy resources seemingly have given Russia an upper hand in international affairs.

Nevertheless, the reliance of the Russian economy on energy revenue, particularly from the EU, highlights one of Russia’s key vulnerabilities.

Europe should remain united in order to promote democracies in the post-communist Eastern European states and preserve Western liberal values. A revision of energy policies and politics as one of the EU leverages is crucial today more than ever; otherwise, after the Ukraine crisis, the Baltic states might be doomed to be the next target.

The weapons being sent to Ukraine, and those it’s still hoping for