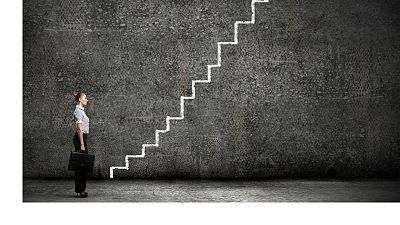 The odds are still stacked against women's success in the workplace, and artificial intelligence (AI) is only making it worse, a new report released on Tuesday claims.

Because algorithms used in human resources systems are built on historical data reflecting past bias against women in the workplace, they tend to disadvantage women throughout their careers, according to the study, published on International Women’s Day in a joint collaboration between UNESCO, the OECD and the Inter-American Development Bank.

Here’s a look at how AI bias in the workplace happens - and how it might be tackled.

1. In the hiring process

Workers increasingly find new opportunities through online jobs platforms, such as Indeed and LinkedIn and on social media like Facebook and Twitter. The algorithms on these platforms influence which job opportunities people learn about, and how well-suited they perceive themselves to be for a particular role.

But research found that setting the user’s gender to “female” resulted in fewer instances of ads related to high-paying jobs than for users selecting male as their gender.

Even if women have a similar type of skill set as men, and even if they are better qualified, the algorithms can work against them, according to the report. LinkedIn discovered that more men than women were shown open positions simply because men were more often seeking new job opportunities.

"To give women equal opportunity in these areas, we need to look at how to de-bias the systems"

Dr Marielza Oliveira
Director in communications and information at UNESCO

That’s on the applicants’ side. But algorithm bias also influences the recruiters’ side - at the expense of female candidates.

“Recruitment and HR recommendation systems are built on data that is generally historical data of successful applicants. Of course, historically speaking you’re talking about CVs of mostly men, especially for the more technologically-oriented profiles,” Dr Marielza Oliveira, a director in communications and information at UNESCO, told Euronews Next.

“A historical data set of successful applicants will essentially be a male-dominated data set,” she said. “To give women equal opportunity in these areas, we need to look at how to de-bias the systems”.

As social bias feeds into AI algorithms, soft skills which are often associated with women have led AI to match women to jobs in conflict management and communication, for instance. But these skills are not as well paid as hard skills, perpetuating the gender pay gap.

Even in the fields of tech and AI, women will generally be offered positions that require fewer technical skills, with men being pitched lucrative positions in machine learning and women being considered for roles in data analytics.

Dr Marielza Oliveira
Director in communications and information at UNESCO

“We need to get women better represented in the fastest-growing industries and the best-paying jobs, or we’ll end up with an even bigger pay gap,” Oliveira said.

New systems are looking at how to leverage AI for gender equality in hiring processes.

That includes being mindful of the language used in job adverts to make them sound less tech-oriented so that women respond to them more.

Right now, the same ad could be posted with different wording which would greatly influence whether women respond to them or not.

3. Online harassment: AI to the rescue

It’s not all gloom and doom for women in a future AI-dominated world.

The report highlights how AI can be used to monitor offensive messages as well as potential sexual harassment or online bullying, including in the workplace.

It’s no small issue, especially with the rise of remote work and our growing reliance on online environments.

Research carried out in the United Kingdom in 2016 found that 52 per cent of women overall - and nearly two-thirds of women aged 18-24 - experienced sexual harassment at work.

Several companies and researchers are trying to find solutions. A group of academics at Maastricht University in the Netherlands developed #MeTooMaastricht, a chatbot to assist people coming forward to report their harassment experiences.

Active efforts to rid recruitment algorithms of their biases and clean up online environments of harassment will be needed to fully reconcile women with the tech world, says Oliveira.

“We cannot have innovation by depreciating and disengaging half of the brains of the world. If we want AI to work, we really need to make it inclusive,” she said.

Meet the women CEOs shaking the foundations of the tech industry