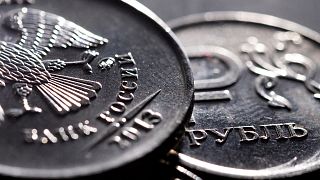 The value of the Russian rouble has plunged as economic sanctions in the wake of Russia's Ukraine invasion begin to bite.   -  Copyright  Dado Ruvic/Reuters
By Euronews and AP  •  Updated: 05/03/2022

The United States and European allies are looking to step up punitive sanctions on Russia for invading Ukraine, and while the penalties are already hurting Russia’s economy, they have failed so far to stop the fighting.

The Biden administration announced additional financial sanctions on Thursday aimed at people in President Vladimir Putin’s inner circle. The US State Department said it was imposing travel bans on 19 Russian oligarchs and dozens of their family members and associates, mirroring initiatives under discussion in the UK and elsewhere.

Earlier this week, the White House announced new sanctions against Russia and its ally, Belarus, including export controls aimed at Russia’s oil refiners.

The US also joined Europe and Canada in closing its airspace to Russian airlines. And the Justice Department announced a new initiative to go after Russian oligarchs.

The ratcheting up of sanctions has had a surprisingly quick effect.

The rouble has dropped sharply and inflation is on the rise, creating new anxiety for Russian consumers - not just the oligarchs targeted in early measures.

A pullout of foreign companies has caused car factories in Russia to shut down, and Boeing and Airbus have stopped supplying parts and services to Russian airlines.

Russia’s economy is less than one-tenth the size of the US economy - only half as big as California’s alone - and economists believe it will shrink further, a fate incongruous with Russia’s standing as the world’s second-leading nuclear power.

Here’s a look at some of the sanctions now in place. Combined, they add up to some of the toughest penalties imposed on any nation short of military action.

The United States, the European Union, and the United Kingdom have limited the ability of Russia's Central Bank to draw on more than $600 billion (€548 billion) in foreign currency reserves. That has left the bank with few tools to prop up the rouble and prevent it from crumbling in value.

The shrinking rouble - which is now less valuable than Bitcoin and many other cryptocurrencies - has caused inflation to spiral.

Russians have lined up at banks to withdraw rubles and convert them into dollars, which reduces the central bank's foreign-currency reserves.

"In Ukraine, people are standing in line to get guns. In Russia, people are standing at the ATM machines because they understand they might not be able to get this money in two days, or it will be, like, twice as less," Ukrainian MP Oleksandra Ustinova said while lobbying US senators for even tougher measures.

The West has cut key Russian banks out of a financial messaging system known as SWIFT, which is used every day to route billions of dollars among more than 11,000 banks and other financial institutions around the world.

The EU finalised a list of banks it would remove from SWIFT which included seven Russian banks but excludes two of the country's largest banking institutions, Sberbank and Gazprombank.

Western allies have held back from kicking all of Russia out of SWIFT, just as they considered but rejected that step in 2014 when Russia invaded and annexed Crimea from Ukraine.

Russia has declared that kicking it out of SWIFT would be equivalent to a declaration of war.

Kicking Russia out of Brussels-based SWIFT could also hurt other economies, including those of the US and Germany which buy oil and natural gas from Russia.

Cutting Russia off from technology

The US said last month that it would limit exports of technology such as semiconductors to Russia, and allies in Europe and Japan cooperated in the move.

This week, the Biden administration announced that it would extend those export controls to Russian oil refineries and Belarus.

President Joe Biden said the earlier exports controls would deprive Russia of more than half its current high-tech supply and strike a blow against Russia's hopes of modernising its military, aerospace industry, and space programme.

The export controls could make it difficult for Russia to update airplane equipment, machine tools, smartphones, game consoles, televisions, tablets, and other gadgets. However, the restrictions could simply cause Russia to turn to China to meet its needs for those devices and their components.

Exports of oil and natural gas are vital to Russia's economy, but those products have largely been spared sanctions because Western leaders are wary of moves that might hurt their own consumers. Oil prices have already moved higher since Russia's invasion.

The US says all options remain on the table, but banning Russian energy imports could restrict global supplies and "raise prices at the gas pump for Americans," White House spokeswoman Karine Jean-Pierre said Wednesday. "That’s something that we’re very aware of".

Biden is clearly worried about rising gasoline prices heading into the mid-term elections this year, having announced the release of oil from the federal Strategic Petroleum Reserve. US gasoline prices are at their highest levels since 2014.

Senators from both major parties have proposed banning US imports of Russian oil.

"It makes no sense at all for us to rely on energy from a country that is actively engaging in acts of war against a freedom-seeking democracy — Ukraine — when we are blessed with abundant energy resources right here in America," said Democratic Senator Joe Manchin, a prominent supporter of fossil fuels produced in his state.

European Commission President Ursula von der Leyen said on Thursday that Europe has enough gas to make it through the heating season, which is starting to wind down.

Germany has already shelved plans of the Nord Stream 2 pipeline which envisioned ferrying gas supplies directly from Russia to northern Germany in light of Russia's invasion. The pipeline is owned by a subsidiary of Russia's state-owned Gazprom.

After hesitating for days because of potential retaliation, the United States closed its airspace to Russian airlines. The move came, however, only after the European Union and Canada had already barred Russian planes.

For the US, prohibition is mostly symbolic.

Russian airline Aeroflot operated only a few flights a week to the US, and no US passenger airlines fly to Russia, although a few United Airlines flights were passing through Russian airspace on their way to and from India. Cargo carriers FedEx and UPS stopped service to Russia in recent days.

Aerospace closures are having a much greater impact in Europe, with neutral Switzerland and Sweden also choosing to follow the example of other European nations.

"They won’t be able to land in, take off or overfly the territory of the EU. Including the private jets of oligarchs," von der Leyen said of the airspace measures in a tweet.

Closures have meant that airlines flying from Europe have had to take longer routes to reach their destinations. A Finnair flight from Helsinki to Tokyo, for instance, redirected its flight path to avoid Russian airspace, adding more than a third of its usual flight time to the journey.

Although it will take longer to be felt, the announcement that Boeing and Airbus will cut off spare parts and technical support to Russian airlines is of more serious concern for Russians.

Most planes in Russian fleets are made by one of those two companies, according to data from aviation researcher Cirium.

The Justice Department announced this week that it will create a team of federal agents and prosecutors to pursue wealthy Russians or anyone else who aids Russia’s invasion of Ukraine or uses cryptocurrency to help Russia evade sanctions. The team, called Task Force Kleptocapture, could seize assets belonging to oligarchs.

Even before the new team was lined up in Washington, France seized a yacht belonging to the head of Russian state oil company Rosneft, and a German official said a yacht owned by another Russian billionaire won't move from the Hamburg shipyard where it is being serviced.

Italian police also seized a yacht owned by Alexey Mordashov, the richest man in Russia before being blacklisted this week by the EU. The Lady M was impounded by authorities in the northern port of Imperia on Friday.

And then there is Roman Abramovich, the Russian billionaire who said he is looking to sell Chelsea, the English soccer club that he has owned for 19 years, as he faces potential financial sanctions.

At a game this week, opposing fans taunted Abramovich's players by chanting: "You’re getting sold in the morning".

The UK announced on Friday that it was seeking emergency powers to be able to sanction Russian oligarchs already sanctioned by the EU and the US. The Conservative government has been criticised for its slow response in hitting Russian businessmen with links to the Kremlin, having previously received donations from Russian billionaire donors.

What are the next moves?

New sanctions from the US will target Putin ally Alisher Usmanov, one of the wealthiest people in Russia, and Putin's press secretary, among others. The Biden administration said they will be cut off from the US financial system and their assets in the US will be frozen.

Following Russia's attack on the Zaporizhzhia nuclear plant, the EU is now potentially considering further sanctions focused on the energy sector. Russia is a crucial source of energy for the bloc so these measures aren't being considered lightly.