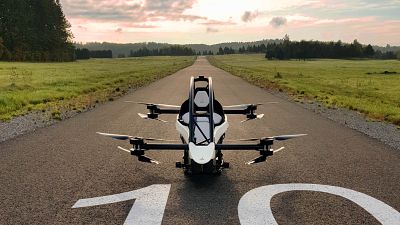 As he remembers it, Peter Ternstrom was only about 8 or 9 when the idea came to him while reading the French Sci-Fi comic Valérian to build a flying car.

Decades later Ternstrom has managed to realise a drone-like “jet ski of the skies” of his own, one he hopes could be worthy of Galaxity, the capital of Earth in Pierre Christin and Jean-Claude Mézières’ classic comic.

"So that's why it makes me really happy to be able to at least provide the first little step in the creation of a flying car with the Jetson One".

Early attempts at a prototype

Jetson Aero, the company behind the Jetson One, is the fruit of a collaboration between Ternstrom, a Swedish entrepreneur with three previous startups under his belt, and friend and co-founder, Tomasz Patan.

Ternstrom admits that the early prototypes that he and Patan built, utilising the latter’s vast experience as a drone-building engineer, were a little inelegant in design.

Or as he puts it, "a little bit like a flying aluminium ladder with a sports seat on top".

"It was like [a] very rudimentary thing... But it was a platform for us to test motors and propellers, and which batteries to use and those specs, and we thought that this was going to be really easy to make," Ternstrom explained.

As it turned out, the pair had greatly underestimated the scale of the task, wrestling with the laws of physics that dictate that once you make something twice as big, it becomes four times as heavy.

"We had all kinds of trouble when it comes to matching the correct motor with the correct propeller, propeller size, propeller information, the width of the cables, those really thick cables for this," he explained.

In all, it took Ternstrom and Patan about four years to figure out the technical issues and launch their prototype of the Jetson One to market in October 2021.

Ternstrom stresses that their product isn’t designed for commutes or “hopping between skyscrapers in Manhattan”. For starters, you wouldn’t be allowed to.

Under US rules, this type of aircraft is not permitted to fly near airports or densely populated areas.

But the fully-electric Jetson One - weighing 190 lbs (86 kg) and having a flight time of 20 minutes on one charge - was built to comply with US regulations which don’t require a pilots licence to fly it.

It's a really profoundly ecstatic experience to fly this. The first time you jump in it, and it picks you up in the sky and you just start floating over a forest or over a beach or whatever you want... It's incredibly fun

To this end, Ternstrom and Patan have conceived the Jetson One as a kind of pleasurecraft for the skies, to be used “simply for fun”.

"It's a really profoundly ecstatic experience to fly this," Ternstrom said.

"The first time you jump in it, and it picks you up in the sky and you just start floating over a forest or over a beach or whatever you want. It's incredibly fun".

What distinguishes their product, he says, is not the physical aircraft they’ve developed, but the highly-automated software system that makes Jetson One easy to fly even for a novice pilot.

"The most important innovation with the Jetson One is the flight computer and the flight control system," he said, adding that they can “put anyone in the seat and that person will be able to fly in five minutes".

The aircraft’s flight computer uses a Lidar sensor system to keep the pilot out of harm’s way and comes equipped with an auto-landing system.

"You just stop in the air, you put the throttle to zero and it lands," said Ternstrom.

For now, the entire years’ production of the Jetson One for 2022 is sold out, with the company now only accepting orders for production in 2023.

Buyers are listed on the website as coming from all over the world, including from Europe where the regulatory framework governing this kind of aircraft is a little more opaque.

The issue is that this kind of aircraft doesn’t have any designated classification in the EU.

"It's not a fixed wing aeroplane. It's not a helicopter. What is it? So right now, there is a little bit of a grey zone," Ternstrom explained.

"It's not stated that it is illegal to fly, but it's also not legal".

He believes that while we are still a few years away from seeing any kind of regulation in Europe if it does happen, we are likely to end up with a system resembling that of the United States.

"Maybe with some kind of pilot's licence that you can do from your home, but from your computer, just like [what] we have with the drone licence, right?" he said.

"That's what I think is going to happen, but it's going to take some time".

Flying vehicles like Jetson Aero’s model could come under regulations governing the nascent air mobility industry which global giants like Boeing, Airbus and Lockheed Martin have become active in.

Ternstrom stresses that Europe could fall behind the US in this particular sector if it delays bringing a legal framework for the industry.

"If the regulations are not in place in Europe within one or two years, the entire industry, an industry that is set to be almost as big as the car industry today, cannot develop anything in Europe, and everything goes to the United States," he said.

Looking ahead, Ternstrom is betting on the continued growth of the air mobility sector and believes someday it could compete with the market for cars.

He and Patan are already planning their next model - a two-seater aircraft - but say it will be a few years away and is likely to be much more expensive than the Jetson One’s price tag of € 80,000.

"Five years after that, I think at the beginning of 2030 hopefully, our ambition is to have a four-seater flying car that can replace a family car," he said.