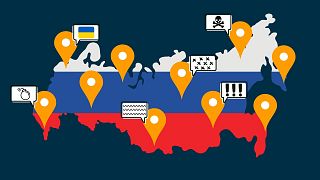 Google Maps reviews of Russian businesses are being flooded with information about the war in Ukraine   -   Copyright  Euronews Next via Canva
By Tom Bateman  •  Updated: 02/03/2022

"The food is good, but the war in Ukraine is not," reads a recent Google Maps review of a McDonald's in a southeastern suburb of the Russian capital, Moscow.

This message - and many others like it - is a part of an online movement using Google reviews as a way to spread information about the war in Ukraine inside Russia, where media reporting of the invasion has been tightly controlled.

On Monday, a Twitter account claiming to belong to the hacker group Anonymous told its 7.6 million followers: "Go to Google Maps. Go to Russia. Find a restaurant or business and write a review. When you write the review, explain what is happening in Ukraine".

"Leave 5 star reviews (unless it's Russian State-owned, then feel free to leave 1 star ratings). The point is to push information to the Russian civilian population being lied to by Putin," the account said.

'We doubt that you know the truth'

Euronews Next looked at a random selection of reviews in three cities: Moscow, Petrozavodsk in western Russia and Khabarovsk in the country's far east, and found extensive evidence of messages that were pro-Ukraine and anti-Russia's president, Vladimir Putin.

"Russians stop, you are being zombified! We do not need to be freed from anyone!!!! I and my family have been under fire for 4 days, we are scared," a Google Maps review of a Moscow food court read.

"Dear people of Russia, I am writing this message because we doubt that you know the truth about the current situation in Russia. On 24 February, Vladimir Putin launched an attack on your brothers and sisters in Ukraine," said a review of a cafe in Petrozavodsk.

While some were relatively restrained - one review for Moscow's Café Pushkin complimented the "beautiful café" before calling on Russians to carry out an "uprising" - others relied on shock tactics in an effort to show the reality of the war.

Although Euronews Next could not verify their authenticity, one account that reviewed several businesses in Khabarovsk posted graphic images of what appeared to be the bodies of Russian soldiers along with their messages.

'This already happened with Navalny'

This isn't the first time people have found unusual ways to share information online in Russia as government control of information has tightened, Vera Michlin-Shapir, a research fellow at King's College London's Centre for Strategic Communications, told Euronews Next.

"This already happened with Navalny," she said.

During the 2021 Russian parliamentary elections, opposition leader Alexei Navalny launched an app containing lists of candidates voters should choose in order to oust lawmakers from the governing party allied to President Putin.

"Once they released it, the Russian government put a lot of pressure on Google and Apple to remove it from the app store," Michlin-Shapir said. The companies did as they were told.

But can campaigns like this have a meaningful impact? David Betz, a professor of modern warfare at King's College, told Euronews Next he was sceptical that an information campaign run by people outside Russia would be able to cut through to people.

Put yourself in the Russian position...I think I'd be patronised

"Put yourself in the Russian position - you're reading shit like that, you're looking at Google Maps trying to find a burger restaurant. I think I'd be patronised. I'd say who the fuck are these people?" he said.

Betz also questioned whether the information campaign was an organic, grassroots effort.

"It feels to me like a clever wheeze dreamed up in, you know, 77 Brigade or something like that," he said, referring to the British Army unit devoted to information warfare.

"It's like a guerrilla war, you want to spread the message. The government is suffocating the information space and you are trying to push it out as much as you can," Michlin-Shapir said.

"So if you find sympathy, if what you're saying actually taps into what people feel, those audiences that you think you're going to reach, then yes, you can create an effect. But that's something that you have to calculate".

When Euronews Next asked Google to comment on the use of Google Maps reviews to spread information about the war in Ukraine, the company did not respond.

But according to Google's policy on user contributions, using the platform in this way appears to break the company's rules, as "deliberately fake content, copied or stolen photos, off-topic reviews, defamatory language, personal attacks, and unnecessary or incorrect content,'' are all prohibited.

In order to deal with the volume, the company relies on an automated system for its "first line of defence" in identifying patterns like a sudden spate of one or five-star reviews, "suspicious" reviewer behaviour or "uncharacteristic activity" in a particular place, Leader wrote.

"Machines are our first line of defence because they’re good at identifying patterns. These patterns often immediately help our machines determine if the content is legitimate, and the vast majority of fake and fraudulent content is removed before anyone actually sees it," he said.

Google did not respond to a Euronews Next question about whether its automated moderation system could be overwhelmed by a large number of reviews posted to its platforms.

Why are Google and Facebook facing EU and UK antitrust probes?