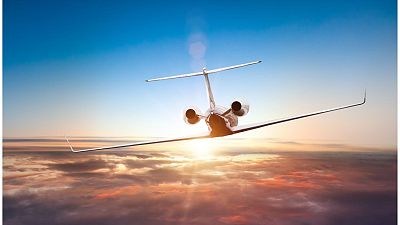 A new Twitter account is tracking the air travel of Russia's richest businessmen, as international sanctions intensify over the country’s invasion of Ukraine.   -   Copyright  Canva   -
By Natalie Huet  •  Updated: 01/03/2022

The teenager who became famous for tracking the whereabouts of Elon Musk's private jet has a new target: Russian oligarchs.

Jack Sweeney, a 19-year-old IT student at the University of Central Florida, has set up a new Twitter account following the aircraft of Russia’s billionaires as they face growing international pressure over the country’s invasion of Ukraine.

The Twitter account, called Russian Oligarch Jets, shows times and maps for when and where the private jets of some of Russia’s top billionaires take off and land. It had more than 100,000 followers by midday CET on Tuesday.

The automated feed launched on Sunday after the European Union and the United States announced new sanctions on the inner circle of Russian President Vladimir Putin, and pledged to freeze their assets, including jets, yachts and luxury homes.

"I’m sure some people will try to kick some of these oligarchs out of the US or their country as they find out they're here," Sweeney told Euronews Next.

"I don’t really expect much trouble since I’m here in the US," he added.

How to chase a billionaire

The student first made headlines last month after Elon Musk offered to pay him to shut down an account tracking the whereabouts of the SpaceX CEO’s jet.

The account relies on bots to scrape publicly available air-traffic information, but Musk has called it a security risk.

To track Russian tycoons, Sweeney now uses a list of private jets and helicopters that was already being tracked by a blog called Radar Spots.

Radar Spots posted on Monday a detailed guide to tracking the flights and making sense of aircraft registration data, inviting people to try tracking the tycoons themselves.

Despite harsh international sanctions, Russian tycoons still appear to be moving around – or at least their aircraft are, as the data doesn’t reveal who is on board the flights.

The Russian Oligarch Jets account has already tracked several flights by aircraft owned by Abramovich, including a helicopter trip in the Caribbean on Monday.

Sweeney has also set up a Twitter account specifically tracking jets that Putin might use, but he cautioned in a tweet not to expect it to be very accurate because there are several VIP planes and there isn't as much available flight data in Russia.