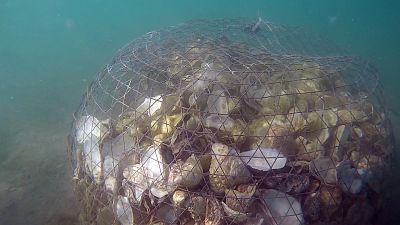 A restaurant group in Dubai is repurposing its used oyster shells and returning them to the sea as part of a project to help maintain and support the local reef system.

The Maine New England Brasserie Company has three branches across Dubai and is the largest buyer of oysters in the region. It had previously been sending over 50,000 oyster shells to landfill each month.

Since setting up the Oyster Project, the restaurant now informs customers when they order that the shells are part of a community-driven restaurant initiative.

Founder & Managing Partner, Joey Ghazal says the shells are now used to create artificial reefs back in the sea.

“When we tell our customers that the oysters that they're having end up back in the sea, and that every single oyster that regenerates can filter gallons of water a day and is bearing bettering the environment, they really feel like they're doing something positive."

The Maine teamed up with a local ecological school and marine group to return these shells to the sea.

The collaboration between the three groups was made possible via a Dubai based entrepreneur Fadi Abu Ghali, who co-founded the project.

Fadi Abu Ghali told Euronews that he wanted to find a solution for the wasted shells.

“I'm a board member at the Arbor School and I've worked with the Emirates Marine Environmental Group for about 18 years, So I thought of putting the pieces together and creating a beautiful story that touches on a couple of things, including education, the environment and the food waste problem,” he said.

The project aims to rehabilitate the natural reef system off the coast of Dubai to promote marine biodiversity and create a natural habitat for the endangered hawksbill turtle.

The Arbor school in Dubai follows a unique eco-literacy curriculum, and its Year 8 students who are 12 to 13 years old are studying the oceanography of the UAE.

The class in collaboration with the Oyster Project, fill discarded fish traps (known locally as gargoors) with the oyster shells. The repurposed shells will provide structures where marine life can grow.

the children are now building sample boxes that will be attached to the reef.

Ben Wren, Environmental Education Adviser at the Arbor School, said this was a unique opportunity to take the curriculum from the classroom out into the real world.

“All of our students spend time here on beaches, and they're really familiar with the challenges of the marine environment.”

He added that the group have already put some parts of the reef in place.

“In order to monitor it more easily, the children are now building sample boxes that will be attached to the reef that we can physically remove from the water and examine on the beach at our own time using specialist equipment," he said.

The sample boxes will allow the pupils to get a much closer look at what is happening on those new reefs.

The long term plan is to make the Oyster Project an ongoing part of the school curriculum.

“Our goal is to come back in about six months with this group who will then be in year nine and the next group of year eights and to do a hand-off,” Ben said.

With the support of Emirates Marine Environmental Group (EMEG), the school pupils place and then monitor the development of the structures.

The gargoors will be transformed into biological building blocks and placed offshore at the EMEG reserve. If the project proves to be a success, it will then be expanded to different areas outside the reserve.

Iman is one of the Arbor School students involved in the project, and she says she enjoys learning about problems and how you can solve them.

“It's actually really cool because most schools, they don't do as many things hands-on, and we mostly learn theory, and theory can only get you so far and doing stuff in real life,” she told Euronews.

Fellow student, Floris, said one of his favourite things about the project is being out of the classroom environment and being able to make a real difference: “I think it's cool. Like we use them, we put them back. It's like an eco-cycle.”

Another student, Janelle, added that she loves the practical side of being involved: “You don't think you can make an impact until you actually do it, but doing something big like this is just, it's really fun, and you can see how much it develops”.

Over the last six months, an estimated 250,000 oyster shells have been donated by The Maine to the Arbor School. The goal is to see that number reach one million by the end of 2022.