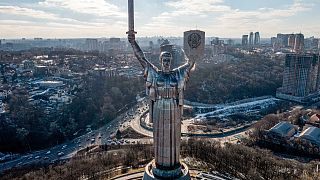 Ukraine’s technology sector is the country’s third-biggest export and is aiming to become a tech hub in the heart of Europe.

But Russia’s invasion is putting its progress at risk and the country needs help from outside its borders, said the Director of TechUkraine, a tech platform that was launched by Ukraine’s Ministry of Economic Development and Trade.

"Help us in our fight for our country, for our values and our path," Nataly Veremeeva appealed to the international community in comments to Euronews Next.

"We are a truly European and global country, wishing to add the most precious that we have – our creative spirit and minds of our smart people – to solving not only local tasks but also challenges that the whole [of] humanity is facing".

Last year, Ukraine set many tech records, such as its first "decacorns" - start-ups that has exceeded a valuation of $10 billion (€8.8 billion) - and growth of its IT industry of 36 per cent.

And the country already has many start-up stars such as the AI-based writing engine Grammarly, the company that makes PDFs Readdle, and the wireless home security company Ajax.

'Fighting for the future'

Much of the thriving tech sector has become resilient having become accustomed to living under the pressures of an ongoing conflict which began in 2014 when Russia annexed Crimea, said Veremeeva.

"The Ukrainian spirit is very strong. The tech community, being an active part of the society, consisting of thousands of educated people with a global outlook, is one of the pillars of Ukraine’s resistance," she said.

"We know we are fighting for our country, for our freedom to build our future according to global values," she said, adding, the tech community is valuable in shaping that future despite the current hurdles.

However, one of the biggest threats to the thriving tech economy is panic among clients as the war escalates, Veremeeva said.

The Ukrainian spirit is very strong. The tech community... is one of the pillars of Ukraine’s resistance.

"We do hope that clients of Ukrainian companies will choose to continue working with us. This is really important, since the income, earned by such projects, goes to support the army and also the whole economy of Ukraine," she said.

She noted that many companies already have contingency plans in place and have prior experience with war since the eastern regions began hostilities in 2014.

As for critical infrastructure, it is currently protected by Ukraine’s armed forces.

"We do believe our management maturity will help not to let down a single client that will choose to continue working with our talented developers and buy our IT products," Veremeeva said.

As for whether tech companies will move their personnel from offices in Ukraine, she said she believed for now it would not be necessary.

However, international tech giants are present in Ukraine and it is unclear for now if they will relocate staff.

Google is believed to have around 200 employees working in Ukraine but has not publicly stated its plans.

Uber has paused operations in the country and has offered its Kyiv-based employees and immediate families temporary and voluntary relocation to other parts of Ukraine or abroad.

Meanwhile, Lyft said in comments to TechCrunch it would offer financial support for emergency preparedness and for those who wish to temporarily relocate.

And Apple’s chief executive officer Tim Cook said on Twitter "we are doing all we can for our teams there and will be supporting local humanitarian efforts".

100 days of war: The rise and resilience of Ukraine's tech sector