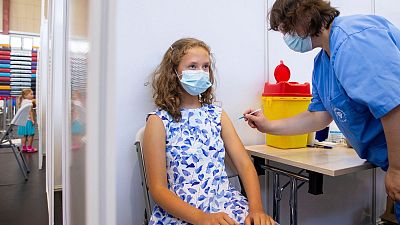 The COVID-19 vaccine race initially focused on getting the elderly and medically vulnerable protected before gradually moving through the rest of the adult population and then children.

The emergence of the Omicron variant over the last couple of months put vaccination campaigns under the spotlight once again.

So, where is Europe up to with regards to vaccinating children?

The European Medicines Agency (EMA) approved the use of the Pfizer vaccine for children aged 12-15 in May 2021 and for children aged 5-11 in November 2021, the first COVID-19 vaccine to be given such approval in the EU.

The authorisation for the 12-15 year-olds was based on a study involving 2,259 children in the age group which showed that their immune response was comparable to those in the age 16-25 cohort.

None of the children who received the vaccine developed COVID-19, compared to 16 who did develop COVID-19 after receiving a placebo.

For those aged 5-11 years-old a similar study was carried out with 2000 children. They were given a smaller dose than those aged 12 and above, and of the 1,305 children receiving the vaccine, three developed COVID-19 compared with 16 out of the 663 children who received a placebo.

This means that, in this study, the vaccine was 90.7 per cent effective at preventing symptomatic COVID-19.

The EMA concluded that “the benefits of Comirnaty [the Pfizer vaccine] in children aged five to 11 outweigh the risks, particularly in those with conditions that increase the risk of severe Covid-19”.

The EMA also approved the Moderna vaccine for use in the 12-17 age group in July. This time, a study of 3,732 children in this particular age group showed none of those who received the vaccine contracted COVID-19 compared to four in the placebo group.

The use of the Moderna vaccine among children aged 5-11 is currently being assessed by the EMA.

Should children get a COVID vaccine?

There has been a debate over the merits of vaccinating children who do not have underlying conditions as the chances of them developing a severe illness from COVID-19 are lower than adults.

Some parents have expressed concern about vaccinating their children against COVID-19 over fears of potential side effects, such as myocarditis and pericarditis.

However, in the US where the vaccine rollout for children aged five and over and young people has been ongoing and where tens of millions of doses have been given, only 2,239 preliminary reports of myocarditis or pericarditis among people ages 30 years and younger who received COVID-19 vaccines have been received by the US Centers for Disease Control and Prevention (CDC) as of February 10 2022, and 1,307 of those reports have been verified.

Despite vaccines having been approved for 5-11 year-olds by the European medicines regulator, not all European governments or health agencies have followed its lead.

However, most countries have started to open their vaccination programmes to children over the age of five. This is how they compare.

The vaccination programme for those under 18 in the UK had an uncertain beginning. The four devolved governments had slightly different approaches and the Joint Committee on Vaccination and Immunisation (JCVI) recommended on September 3, 2021 not to vaccinate children aged 12-15. They said at the time that there was not enough evidence to recommend expanding the rollout to that group.

However, the committee left the door open to ministers to go down a different route, and it was decided that children over 12 should receive the vaccine.

All teenagers aged 16 and 17 in England started to be offered vaccines as of August 23, 2021, and 12-15 year-olds followed in September. Approximately 60.3 per cent of 12-15 year-olds in England have had at least one dose, according to the country’s national health service on February 24.

All four of the devolved nations announced last week that they would start offering a vaccine to children aged five to 11 years-old.

In Italy, 81.81 per cent of 12-19 year-olds have received at least one dose and 37.32 per cent have received a booster dose, according to the Italian government’s vaccine report released on February 23.

The country authorised the Pfizer vaccine for 5-11 year-olds on December 1 following the EMA’s green light and have so far given at least one dose to 36.81 per cent of the age group.

Italy reported 103 coronavirus-related deaths on the same day, the first daily death toll of more than 100 since June 8.

Initially, vaccines were only recommended for children with underlying conditions, but in the wake of the spread of the Delta variant, it was decided on August 16 to offer a vaccine to all children over 12.

The STIKO committee - the expert body which advises the German government on vaccines - said in a statement that the decision came after examining new safety data, especially from the US, following the vaccination of around 10 million teens.

They said that given "the current state of knowledge, the advantages of vaccination outweigh the risk of very rare vaccine side effects".

There have been concerns over myocarditis, the very rare heart muscle inflammation observed in connection with the vaccination, especially in vaccinated young males.

However, STIKO said that most of these people went to hospital and were successfully treated. They also underlined the general risk of COVID-19 itself to cardiac health.

The country has so far fully vaccinated 61.3 per cent of 12-17 year-olds and given a booster dose to 26.8 per cent, according to government figures on February 23.

20.6 per cent of children aged five to 11 have received at least one dose.

Ireland has had a remarkably high vaccine uptake in the adult population.

In the five to 11 age group around 25 per cent have received at least one dose.

According to the Polish government’s statistics, 22,498,354 people in the country have received at least one dose and 19,434,137 are fully vaccinated as of February 23, which is around 58 per cent of Poland’s population.

Pfizer and Moderna have both been approved for over 12s, with the former being approved back in June. So far, 3.2 million doses have been given to children aged 12-17, according to the official statistics.

The country began vaccinating children aged five to 11 in December 2021, but the government has not released the statistics for that age group.

France was one of the first countries to open vaccinations to those over 12, doing so on June 15, 2021.

Some 84.4 per cent of 12-17 year-olds have received at least one dose of vaccine, according to the latest figures released by Santé Publique France on February 8, while 81.12 per cent are fully vaccinated and 10.6 per cent have received a booster vaccine.

Since the end of September, adolescents over 12 have been required to use the French health pass. This pass proves the holder's vaccine status, and is needed to access places such as cinemas or restaurants.

While it has proved controversial, its introduction has seen an uptake in vaccinations.

France has given 4.5 per cent of children aged five to 11 at least one dose of vaccine as of February 7.

According to the Spanish Health Ministry’s latest health report from February 23, 91.4 per cent of the approx 3.9 million 12 to 19 year-olds in Spain have received at least one dose of a COVID-19 vaccine and 86.9 per cent are fully vaccinated.

Spain is one of the leaders in Europe when it comes to vaccinating five to 11 year-olds with 57 per cent of the age group receiving at least one dose.

The Danish Health Authority gave the green light to vaccinating children in the 12-15 age range in June, 2021.

Over 80 per cent of Danish children in the 12-15 age group have received at least one dose, 90 per cent in the 16-18 age group and 57 per cent of those aged five to 11, according to government statistics from February 21.

Switzerland approved the Pfizer vaccine for children over 12 in early June.

According to the latest Swiss health figures published on February 20, 44.29 per cent of children aged 12-15 are fully vaccinated and 46.66 per cent have received at least one dose.

Sweden only started opening up appointments to minors in August, and then just to 16 to 18 year-olds, before eventually opening up to over 12s.

The percentage of children under 18 who have received one dose is 25 per cent and 21.7 per cent are fully vaccinated, according to the European Centre for Disease Prevention and Control (ECDC).

Sweden has decided not to vaccinate all five to 11 year-olds and are offering jabs only to those who are at risk.

“The vaccines are safe, there are very good vaccines but we are now focusing on the medical benefits of the individual child and we don’t see that the benefits are great enough for us to recommend for the whole group,” Britta Bjorklund of the Public Health Agency said.

“We don’t see that we want to vaccinate a whole group of children for the sake of society,” she said.

“We want to see a clear benefit for the children themselves and the individual child so that’s why we don’t recommend it at the moment”.