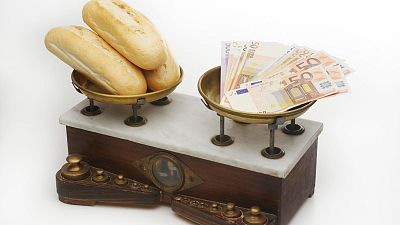 Consumers are struggling to keep pace with inflation. These tips will help you cope with rising prices.   -   Copyright  Canva
By Euronews and AP  •  Updated: 18/02/2022

Inflation - the rise in consumer prices - is a slow erosion of your money over time and it's seriously beginning to bite.

Before 2021, the United States hadn’t seen annual core inflation much above 3 per cent for the better part of 25 years, says Michael Ashton, managing principal of Enduring Investments, a consulting and investing firm in Morristown, New Jersey.

The spike seen over the past year in the costs of fuel, used vehicles, groceries, and just about everything else is the kind of sudden and systemic rise that can give a jolt to most peoples’ everyday spending.

Inflation is not the same for everyone

Inflation hit a 7.5 per cent national average in the US in January while in t, but that’s not likely to be your inflation rate, said Ashton. In the eurozone, inflation soared to 5 per cent in the same month.

You may consume different items than the average person and you may not live in an average place, so your particular rate of inflation quite likely varies from the average, according to Ashton.

With inflation chipping away at your spending power, how can you protect yourself?

Rather than agonising over a single number as a spending power loss to recoup, use the small money moves below to improve your financial position slowly but surely. Here's how:

Firstly, trim discretionary spending, voluntary spending in categories like entertainment or travel, by just 5 per cent. This is one of those incremental changes that isn’t that difficult to do and goes directly to your personal bottom line.

If you can, shop strategically by buying more generic brand products. Save on necessary expenses by using coupons and store loyalty programs. For readers in the US in particular, using membership cards (like Walmart+ and others) to pay 5 cents (€0.04) less per gallon for fuel could help keep you on the road.

Renegotiate your satellite TV, streaming or mobile phone bill for any possible savings.

"I can say from my own personal experience – it’s amazing how easy this is," Ashton noted. He says that every time he would call his cell phone provider, it would offer him a plan that was far better than his current one. "And it doesn’t happen unless you call," he added.

Ashton now makes a habit of calling once a year and asking, "What’s the best plan you have, and should I be on that?"

Reduce the number of subscriptions you have, even if by just one.

“You should do an audit of those from time to time because sometimes they sneak in a price increase, and it just shows up on your credit card,” Ashton said.

Try to bring more money in

Perhaps the most powerful idea of all: ask for a pay rise at work. If you haven’t received an increase in salary in a few years, you’ve likely experienced what amounts to a pay cut because of inflation, Ashton said.

Bodie holds a doctorate in economics from the Massachusetts Institute of Technology and has become an avid proponent of I bonds.

I bonds rates are keyed to the rate of inflation, which lately has been over 7 per cent, he notes. They are a perfect safe haven for near-term savings. And not a bad addition to your long-term nest egg, too.

A minimum investment in bonds through TreasuryDirect.com is only $25, and an individual can put up to $10,000 annually into the savings bonds with electronic purchases. The bonds pay fixed interest plus the inflation rate, adjusted twice per year.

You can withdraw your savings without penalty after one year, but if you cash them in before five years, you’ll lose the last three months’ worth of interest.

"So what you get is essentially a savings account that can’t go down, and that’s going to go up with inflation,” Bodie adds. "Do I need to say more?"

McDonald’s hikes cheeseburger price in the UK amid soaring costs