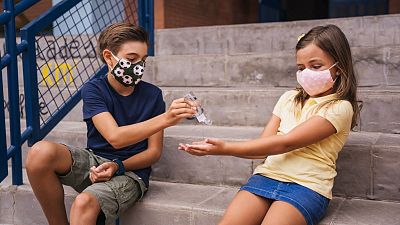 Hospitalisation rates were much lower in adolescents who were vaccinated than in those who were not vaccinated.   -   Copyright  Canva   -
By Ian Smith  •  Updated: 16/02/2022

Children were nearly four times as likely to be hospitalised during the Omicron COVID-19 variant surge compared to the one caused by Delta, according to a new report from the US Centres for Disease Control and Prevention (CDC) released on Tuesday.

The report examined hospitalisation data from the United States from when Delta was dominant (which the CDC designated as between July 1 to December 18) and when Omicron was dominant (December 19, 2020 to January 22, 2022).

Should children be vaccinated against COVID-19?

Since COVID-19 vaccines were approved there has been a debate over the merits of vaccinating children who do not have underlying medical conditions as the chances of them developing a severe illness from COVID-19 are quite low, and some have argued this has to be balanced against the potential side effects of the vaccine.

However the CDC states: “Strategies to prevent COVID-19 among children and adolescents, including vaccination of eligible persons, are critical”.

The largest hospitalisation rate increase among any group in the under 18 category was seen in those aged between 0-4 years, who are not eligible for COVID-19 vaccines in the United States with 15.6 weekly hospitalisations per 100,000 compared to 2.9 during the Delta wave.

The CDC noted that “no differences were found between the Delta- and Omicron-predominant periods in the proportion of hospitalisations that were likely to be related to COVID-19”.

The study also said that incidental admissions, people who were in hospital for non-COVID-19 related reasons and subsequently tested positive while in hospital, do not account for the increase in hospitalisation rates during Omicron.

Where does Europe stand on vaccinating children?

In Europe, the European Medicines Agency authorised vaccines for those aged 5-11 in November and the rollout began in December.

While many countries in Europe have been giving out jabs to children in this age group, others have been more hesitant such as Sweden and England, who have not opened their vaccination campaigns to those aged between 5-11.

"With the knowledge we have today, with a low risk for serious disease for kids, we don't see any clear benefit with vaccinating them," Swedish Health Agency official Britta Bjorkholm told a news conference in January. Although she did say the decision could change if new research or information came to light.

10% of healthcare workers struggle with suicidal or self harm thoughts