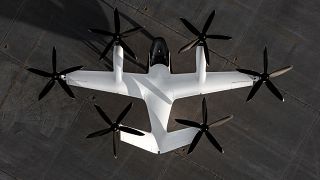 In a statement on Monday, airline ANA and the Californian startup said travelling by air would cut the journey time from central Osaka to the city's Kansai Airport to just 15 minutes, compared to an hour by car.

"Japan offers us a spectacular opportunity to do just that with 92 per cent of the population living in urban areas and Tokyo registering as one of the top 20 most congested cities in the world," he said.

The airport, located on an artificial island 38km west of Osaka, can currently be reached by electric train in 34-65 minutes.

Japanese carmaker Toyota, which has invested almost $400 million (€352.5 million) in Joby will also join the partnership, the companies said.

Japan's government has been pushing to develop aerial rideshare services for a number of years. In 2018, it revealed a document called the "roadmap towards air mobility revolution," which targeted 2023 as the starting date for commercial flying taxi services.

ANA and Joby's announcement did not commit to a launch date - or even year - for bringing the company's five-seater aircraft to Japan, although the 2025 Osaka World Expo has previously been highlighted by other operators as a potential starting point.

"Not only installing eVTOL but also building social acceptance and developing a startup ecosystem in Osaka might be possible under the agreement," company chief executive Tomohiro Fukuzawa told reporters at the time.

But while Japan's airline industry and politicians have been talking up aerial rideshare services, there is a lot of work to do before the flying taxis can take off.

In Monday's announcement, ANA and Joby said they would work together to develop the basic necessities for operating a flying taxi service, including the "infrastructure, pilot training, flight operations, air traffic management, public acceptance, and the regulatory requirements to operate".

Public acceptance might be a challenge in Japan, where noise-sensitive residents have previously protested against low-altitude flights over urban areas.

Last year, Japan's Mainichi Shimbun newspaper reported on noise complaints against US military helicopters in Tokyo, where the aircraft allegedly flew as low as 100 metres above residential areas.

"I want them to conduct flights that are more sensible," one resident told the paper.

China not SpaceX 'responsible' for rocket set to collide with Moon