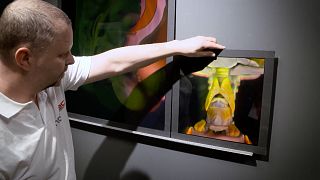 Researchers in Hungary are reinventing holograms and are hopeful the technology could have useful medical applications.   -   Copyright  AP Photo
By Euronews and AP  •  Updated: 14/02/2022

Holograms, invented by a Hungarian-British physicist in the 1940s, are far from being the trendiest technology today.

But a Hungarian laboratory is attempting to revive their use by finding new applications for them.

Based out of a facility 32 km north of Budapest, company HoloTech has joined forces with researchers from the Budapest University of Technology and Economics to reinvent hologram technology.

According to Holotech, the technology has been "in hibernation" for the last 50 or 60 years.

Holograms have traditionally been created from analog sources to allow the viewer to see a flat image from multiple angles, creating the illusion of a 3D object.

But now, the scientists at HoloTech are using digital data sources to create superior clarity and colour in their holograms.

They also reached the full parallax effect, meaning that their holograms can show different perspectives, not only from side to side but also up and down.

"Our mission in the medical field of hologram technology is to try to link our developments with the existing healthcare technology tools that deal with imaging," said Imre Lakatos, CEO of HoloTech.

It's a welcome new support for medical schools, according to Dr Andras Csokay, a neurosurgeon at the Hungarian Army Medical Centre in Budapest.

"In anatomy class, for example, it's much easier to understand the location of internal organs if we could see them in spatial view,” said Csokay.

“We could see better the irregularities or tumours. If we have a better spatial view, we can better imagine what problems they might cause, or where they might put pressure on certain organs. So in all respects it would be a wonderful new resource".

HoloTech has also developed holograms that can assist in the field of security, such as anti-counterfeiting and border security.

Holograms for IDs and passports

Police and border services from several countries have sought technology from the company for creating holographic images of humans for potential use in passports and identity cards.

Within those images, large quantities of coded data on the individual can be hidden and read by security services.

"If we had such a holographic image on a passport or ID card, it would practically solve the problem of creating (illegal) copies. This is very significant, which is why we've been approached by several countries. We've made quite a lot of progress on this, and we have all the technology to do that here," said Lakatos.

Earlier holograms have struggled to produce true-to-life colour and clarity, especially when it comes to human faces.

But Dr Zsolt Papp, a physicist at the Budapest University of Technology and Economics and senior scientific officer at HoloTech, says that the company is perhaps the best in the world at creating true three-dimensional holographic images of humans in realistic detail and colour.

"There are many, many ingredients to a good hologram, and here in this company we have managed to satisfy these conditions relatively well. We have a number of holograms in which we can perhaps be said to be world leaders," said Papp.

Using their proprietary laser technology, HoloTech is able to impose the three-dimensional data on special holographic film which is only .024 mm thick.

Another of their machines can take a holographic print and reproduce it at high speeds and quantities.