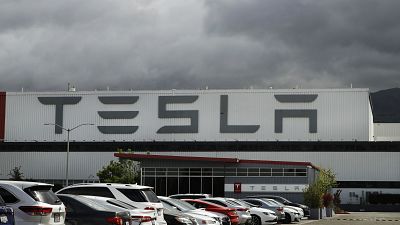 California sued Tesla on Wednesday over allegations of discrimination and harassment of black employees at its San Francisco Bay area factory.   -   Copyright  AP Photo/Ben Margot
By Euronews  with AP and Reuters  •  Updated: 13/02/2022

California regulators have sued Tesla alleging the electric car maker has been discriminating against black employees who have been likened to monkeys and slaves at the San Francisco Bay Area factory where most of its vehicles are made.

The explosive lawsuit seems likely to widen a rift between Tesla CEO Elon Musk, the world's wealthiest person, and the state where he launched the company.

Tesla is now worth more than $900 billion (€789.71 billion), less than 20 years after Musk set out to transform the auto industry.

Musk moved Tesla's headquarters from Palo Alto, California, to Austin, Texas, last year after publicly feuding with California officials over whether Tesla's factory should remain shut down during the spring of 2020 at the beginning of the COVID-19 pandemic.

The 39-page lawsuit, filed on Wednesday in Alameda County Superior Court by California's Department of Fair Employment and Housing, frames Tesla's move to Texas as an attempt to evade accountability for turning “a blind eye to years of complaints from black workers who protest commonplace use of racial slurs on the assembly line".

In response to the complaints, the lawsuit alleges Musk has told workers to be “thick-skinned" about racial harassment, contributing to the culture that's slow to clean up racist graffiti and other hateful symbols scrawled around the factory.

Besides the N-word, other racist language used in the factory included descriptions that likened black workers to a “porch monkey" and “hood rats" and suggestions that they “go back to Africa," according to the lawsuit.

The complaint also alleges the factory was racially segregated, resulting in the area where black workers laboured to be derided as the “slave ship," or “the plantation".

Before news of the lawsuit broke, Tesla preemptively posted a statement on its website lashing out at what it called an “unfair and counterproductive" lawsuit.

The company asserted that the agency has been asked on nearly 50 occasions during the past five years to look into allegations of discrimination and harassment, and closed each investigation without finding any evidence of misconduct.

“It therefore strains credibility for the agency to now allege, after a three-year investigation, that systematic racial discrimination and harassment somehow existed at Tesla," the company wrote, while trying to frame the lawsuit as a publicity stunt.

The allegations against Tesla resulted from a 32-month investigation into its discriminatory practices, according to the lawsuit. The complaint seeks back pay for black employees who were unfairly bypassed for promotion and raises, reinstatements of workers who lost their jobs for discriminatory reasons, and punitive damages.

Major cryptocurrency exchange Binance will make a $200 million (€175.4 million) investment in Forbes, the media company said on Thursday, as it prepares to go public via a special purpose acquisition company (SPAC).

The investment by Binance, the world's biggest cryptocurrency exchange by trading volumes, will replace half of the $400 million (€350.8 million) in private placement commitments already announced by Forbes and SPAC company Magnum Opus Acquisition Limited.

The deal is expected to close by the end of March, Forbes and Magnum Opus said in a statement.

Forbes said in August that it would go public via a SPAC in an attempt to build on its digital transition and pursue further chances for growth.

"The transactions with Magnum Opus and Binance are expected to help Forbes maximise its brand and enterprise values," the companies said.

Binance will help advise Forbes on its digital asset and Web3 strategy, they added, referring to a as yet unrealised version of the Internet where blockchain-based "decentralised" apps and cryptocurrencies are widely used.

SPACs are shell companies that raise money in an initial public offering (IPO) and put it in a trust for the purpose of merging with a private company and taking it public.

In February last year, Binance dropped a lawsuit against Forbes. In 2020, it sued Forbes and two of its journalists for defamation over an October story the magazine published regarding the exchange's corporate structure.

Two senior Binance executives - Chief Communications Officer Patrick Hillman and Bill Chin, the head of its venture capital arm - will join Forbes's board of directors on the closing of the deal, the statement said.

On Thursday, Binance CEO Changpeng Zhao tweeted a CNBC story on the deal to his 5.1 million followers. He later posted a thumbs-up emoji in reply to a post that said "need to set the right narrative discarding the fake news".

“We are perfectly aware that in the 21st century cyberattacks have become one of the tools of aggressive politics, also used by our neighbour," Blaszczak said, apparently referring to Russia.

“For that reason these capabilities are of fundamental, key nature to Poland's Armed Forces," he added.

Blaszczak appointed Brig. Gen. Karol Molenda to head the unit that will cooperate closely with the National Centre for Cyber Security.

Last year, emails were apparently leaked from the private box of Michal Dworczyk, the head of prime minister Mateusz Morawiecki's office, and made available on the Internet. They presented some government officials and decisions in a negative light.

Dworczyk denied their authenticity, but circumstances indicated that at least some were real.

Also last year, Canadian experts determined that a Polish senator, Polish lawyer and a Polish prosecutor - all three critics of Poland’s ruling Law and Justice party - were hacked with NSO’s Pegasus spyware. They were the first confirmations that a tool widely abused globally by repressive governments had been used in the country.

The ruling party denies spying on opponents, but acknowledges it has Pegasus.

The finding triggered an inquiry in the opposition-controlled Senate.

Recently, Canadian experts found that a 33-year-old farmer who was trying to start a political party in Poland was hacked several times by Pegasus in May 2019.