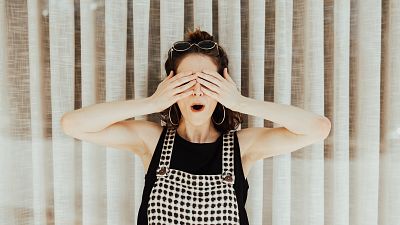 The dating app Tinder is adding a new feature that it hopes will help its users "create human connection" as they swipe through a seemingly endless list of strangers.

The feature, dubbed "Blind Date," works by pairing people up and making them answer questions about their habits, lifestyle and values before their photos are revealed.

Tinder users on blind dates will only be able to see each other's profiles if they both decide they're a match after chatting.

The company said its blind date feature was inspired by the dating habits of Gen Z - people born in or after 1997 - who "value authenticity" and, it claimed, feel nostalgia for the pre-smartphone era of the 1990s.

What's your name and where d'ya come from?

On a blind date, Tinder users can only see the other person's answers to questions like "It’s OK to wear a shirt ____ times without washing it" and "I put ketchup on____".

If each user approves of the other's hygiene and condiment choices, they can "Like" them, Tinder said. If the feeling is mutual, the app will match them, revealing their dating profiles. If not, they can choose to try again.

"There's something really special about letting conversation introduce someone’s personality, without the preconceptions that can be made from photos," said Kyle Miller, vice president of product innovation at the Match Group-owned company.

While the impact of the coronavirus on our love lives has begun to subside, the dating app space has become increasingly competitive in the years since the COVID-19 pandemic made in-person meetups risky or even illegal.

More swipes than ever

Tinder's announcement of its new Blind Date feature, which is currently only available in the United States, comes after rival dating service Bumble announced its takeover of the French, fruit-based dating app Fruitz last week.

Earlier this year, Tinder's parent company Match Group sued Muzmatch, a dating app aimed at Muslims, for including the word "match" in its name.

Match Group had previously attempted to buy Muzmatch "several times" between 2017 and 2019, but was turned down by its owner, the app's lawyers said.

Russian teenager jailed for 'training' for terror attack on Minecraft